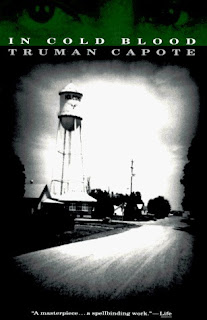 "At the time not a soul in sleeping Holcomb heard them – four shotgun blasts that, all told, ended six human lives."

Goodness – that excerpt, sums up this entire novel.


I am desperately saddened from reading this non-fiction novel – and powerfully impressed with the author.


I have to admit, I held a perception of Truman Capote as somewhat frivolous. I’ve read Breakfast at Tiffanys, and a few short stories of Capote’s, and I know just a bit about his life, all of which made this non-fiction novel, or true-crime novel quite unexpectedly profound.


Profound, riveting, disquieting, I don’t quite know what else. I’ve dreamt of the events of this novel since reading it. Elsewhere on this blog, I’ve described greatness in literature as that which makes me feel and think. This work does both.


I expected the New Orleans born, dirty-south acquainted, New York socialite, intellectual, arrogant author to treat the Kansas yokels as – well – yokels. But no. He treated them with tender, genuine, respect, while at the same time humanizing the cold blooded killers, Perry Smith and Dick Hickock, who murdered four Kansas innocents in the fall of 1959.


Which is not to say, I wished for their pardon. Their crime was unpardonable, but their lives were pitiable, believable, tragic, and sadly repeatable.


But I wax melodramatic. In Cold Blood is an astonishing work. It challenged me. I didn’t love it, but I respect it.


And for writing alone – the man can write. Excerpts below.

This novel satisfies a classic tragedy for the Back to the Classics challenge 2019.

It was ideal apple-eating weather; the whitest sunlight descended from the purest sky, and an easterly wind resulted, without ripping loose, the last of the leaves of the Chinese elms. Autumns reward western Kansas for the evils that the remaining seasons impose…


But Smith, though he was the true murderer, aroused another response, for Perry possessed a quality, the aura of an exiled animal, a creature walking wounded, that the detective could not disregard.