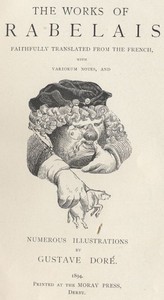 …as you know that in all companies there are more fools than wise men, and that the greater part always surmounts the better…

This pentalogy is usually referred to simply as Gargantua and Pantagruel, but is also collectively known as Master François Rabelais’ Five Books of the Lives, Heroic Deeds, and Sayings of Gargantua and His Son Pantagruel. The first volume, published in 1532, is The Horrible and Terrifying Deeds and Words of the Very Renowned Pantagruel King of the Dipsodes, Son of the Great Giant Gargantua

In 1534, possibly due to popular demand for more, came the prequel:  The Very Horrific Life of Great Gargantua, Father of Pantagruel

The remaining three pick up with Pantagruel again: The Third (1546), Fourth (1552), and Fifth (1564) Book of the Heroic Deeds and Sayings of Good Pantagruel

In entirety, G&P is a little like Gulliver’s Travels mashed together with Jason and the Argonauts, with a sprinkling of Don Quixote.

It is filled with wordplay, bawdy and scatological humor, fantastic feats, astonishing creatures, violence, nonsense, and codpiece jokes – lots and lots of codpiece jokes, such as this description of Gargantua’s prodigious codpiece:

…it was still gallant, succulent, droppy, sappy, pithy, lively, always flourishing, always fructifying, full of juice, full of flower, full of fruit, and all manner of delight. I avow God, it would have done one good to have seen him, but I will tell you more of him in the book which I have made of the dignity of codpieces. One thing I will tell you, that as it was both long and large, so was it well furnished and victualled within, nothing like unto the hypocritical codpieces of some fond wooers and wench-courtiers, which are stuffed only with wind, to the great prejudice of the female sex.

Now I get it. Codpieces are funny in any context, but after the first two or three hundred recurrences, even codpieces start to lose their appeal.

Another technique that Rabelais used over and over and over, when describing some event, some scene, some occurrence, act, fact, deed, mishap, predicament, affair, matter, exploit, juncture, proceeding, case, occasion, calamity, phase, tide, or crisis, he would list every possible synonym for the – whatever it was. I attempted to mimic this device above, but Rabelais’ list were usually much longer – sometimes filling several pages, and occasionally an entire chapter.

Oh ho! Those were great fun, every single time (sarcasm).

Oh yeah – he also made up words. Rabelais used his knowledge of Latin to create new words. I understand that a few of these actually made their way into official French language – but most did not. These made-up words were translated to English, and the reader has to infer their meaning.

It was a laborious read. It probably loses something in translation, and probably loses much more in context. G&P was undoubtedly pretty edgy stuff in the 16thcentury, and I have no doubt Rabelais was witty and well informed. I’m certain it abounds with subtle commentary, clever wordplay, astute observation on the foibles of humanity, and profound philosophy – mostly lost on me.

But I also think it is not entirely just me. I suspect that even among Classics readers, there are a fair number who haven’t heard of this work, and many more who haven’t read it. Why not? I think, because it isn’t timeless. I think it was probably pretty special – and scandalous – in its day, but I don’t think it works well today. Which is sort of my apology to Rabelais for…

I read this as part of the Back to the Classics challenge 2019: a very long classic (my version is over 1000 pages)

Tangential observation: On three occasions Rabelais used the phrase “the beast with two backs”, or some variation, as a euphemism for the act of making love. I’d always thought the phrase was attributed to Shakespeare, who also used it, but it should actually be attributed to Rabelais, as his is the earlier work.