The Shadow Over Innsmouth by H.P. Lovecraft (novel #129) 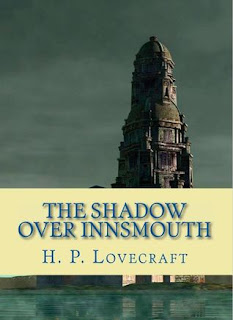 The Shadow Over Innsmouth is the only of Lovecraft’s stories published as a single book – a novella to be precise.

It is part of the Cthulu Mythos.

It was very creepy, in the way a good horror story should be creepy. The story is narrated by Robert Olmstead who is traveling alone through New England on an antiquarian tour in the late 1920s. Economy drives Robert to a town, that neighboring communities shun, that is whispered about darkly and fearfully.

Robert intends to only spend part of a day in Innsmouth, and leave by the evening bus, but his curiosity leads him to Zadok Allen, a crazy old drunk in Innsmouth, who regales Robert with fantastic and sinister tales of the town's history – and the shadow that lingers there. Robert's curiosity is noted by the locals, who all wear the slightly unearthly or deformed “Innsmouth look”. They arrange for the cancellation of the evening bus, and Robert is forced to spend the night.

And of course, things go bump in the night. The locals are in league with an unknown and inhuman evil, and Robert barely escapes with his life.

But, in another sense, he does not quite escape.

I don’t read much horror, but I really enjoyed this. It isn’t gory, or terribly explicit, but physically and psychologically terrifying. Lovecraft is a master of the macabre. I’ve read of few of his short stories, and I will certainly read more.

I read this as part of the Back to the Classics challenge 2019: a classic novella.