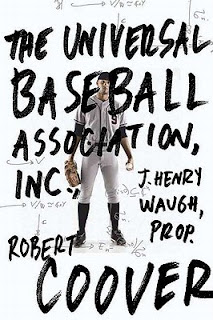 [baseball] It breaks your heart. It is designed to break your heart ~ Bart Giamatti, former commissioner of Major League Baseball

As the full title states, Henry (J. Henry Waugh), is the proprietor of the Universal Baseball Association (UBA): a fantasy roll playing game of Henry’s own creation, ruled by dice and elaborate charts. Henry plays out entire seasons, and keeps meticulous records – alone, at home, on his kitchen table. But in spite of that rather pathetic picture, Henry is not the socially awkward loner you might imagine.

But running the UBA is his greatest passion. In the middle of the 56thseason, a rookie pitcher completes one of the rarest feats in baseball, a perfect game*: no runs, not hits, no errors. To celebrate Henry visits the local bar, engages in playful banter with the barkeep, and has a tryst with one of the denizens.

Henry is flying high, until a few games later, with the rookie phenom back in the lineup, successive rolls of triple six brings out the “Extraordinary Occurrences” chart and one more roll. But this roll, brings about an event so extraordinary, that it rocks Henry’s world.

The novel begins with the perfect game in progress that I thought was a real game. But, there were random references to Henry (wait, who’s Henry?), or the dice (wait, what?), that slowly reveal what is going on – brilliant! Throughout the novel Henry slips into his created world, and back to the real world. He has developed personas and drama in the lives of his players, and though he knows his creation is not real, he is personally invested.

One of Henry’s few regrets is the inability to share his creation. There is no one to exult with over the perfect game – no one would understand. The games are real to Henry – not in a deluded sense that he thinks the players are living beings – but the games are real, the outcomes are real, determined by rules, probability, chance; they have integrity, tradition, sanctity.

So, Henry invites Lou, a friend and colleague from work to join him. Lou is a decent chap, but rather a simpleton. He finds the game complicated and makes irrational lineup changes, not respecting the realism that Henry observes – such as not starting a pitcher with only one day rest. Henry is exasperated by Lou’s ignorant and irreverent approach, and Lou leaves without completing the game. It was a painful and poignant chapter. I hurt for Henry.

I really wanted to love this novel. I’m a baseball fan, and I love stats, history, records, and legends. I did love the story in the beginning. The game itself is impressive. It is an elaborate system of die, charts, records, bios, even a Hall-of-Fame. It truly seemed like a fair approximation of baseball. I wanted to play. But after the extraordinary occurrence, I was let down a little with the turn the story took. It’s very existential, contrasting creationism, determinism, randomness, and free-will (J. Henry Waugh is probably an allusion to Jawheh – the Hebrew name of The Creator). At a crisis point Henry struggles with the option to intervene – he has the power and the right as creator – or to let things play out according to the rules he created. I liked the struggle, but wasn’t completely thrilled with how the narrative depicted it. It is told mostly from the point of view of the fantasy players who reveal Henry’s rule of his universe. I wanted to learn more of what was going on in Henry’s life. Still it was an unusual and entertaining novel.

I read this to coincide with the 2019 World Series.

And so, finally, he’d found his way back to baseball. Nothing like it really. Not the actual game so much – to tell the truth, real baseball bored him – but rather the records, the statistics, the peculiar balances between individual and team, offense and defense, strategy and luck, accident and pattern, power and intelligence. And no other activity in the world had so precise and comprehensive a history, so specific an ethic, and at the same time, strange as it seemed so much ultimate mystery.

*Perfect Game: In the real world there have been only 23 Perfect Games in 150 years of Major League baseball, or approximately once every 10,000 games. In 2010, Armando Galaragga of my Tigers was robbed of a perfect game, which inspired me to write the following about perfection: Splendid Failure