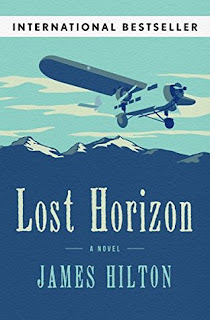 …he [Conway] often felt the invasion of a deep spiritual emotion, as if Shangri-La were indeed a living essence...

A small group of travelers evacuate from civil strife in India, early 1930s. British diplomat Hugh Conway is unofficially in charge of the group which also includes his subordinate Mallinson, British missionary Miss Brinklow, and American businessman Barnard. Some hours after takeoff, the passengers realize their pilot is not the man they expected, and their route is not to Pakistan, as expected. They have no choice but to await their fate as they are unarmed, while the pilot is armed and incommunicative. After a crash landing high in the Himalayas, the group is rescued by a group of locals and guided to a remote valley, and the lamasery of Shangri-La. The four travelers are thus relieved of immediate peril by the mysterious and hospitable monks; but how and when are they to leave? Will they be allowed to, or will they even want to? The valley, under the permissive influence of the High Lama, inspires an almost magical contentedness over its inhabitants – and guests.

I first read this as a teen, and I remember liking it very much, but I’m certain my comprehension of the philosophical points was greater with this reread. It’s a marvelous story, dangerous and exciting, thoughtful and meaningful. I liked the main character Conway quite a bit. The other characters, are rather cliché, but probably intentionally so in order to bring Conway into sharper focus. Mallinson the stereotypical imperialist who expects the world to bow at British command is comically incredulous when the preposterous monks do not. Miss Brinklow is politely disdainful of the heathen and confident she can show them the light. And the American is metaphorically something like a cowboy. Conway, is the least predictable, the most complex, the most captivated by Shangri-La

…he often felt the invasion of a deep spiritual emotion, as if Shangri-La were indeed a living essence, distilled from the magic of the ages and miraculously preserved against time and death.

The philosophy of the lamasery, in the words of one of its adherents:

I should say that our prevalent belief is in moderation. We inculcate the virtue of avoiding excess of all kinds…

I’ll buy that. I think moderation can be a virtue, unless you take it too far.

And even though that sounds rather cheeky, I am quite serious (though it does make me smile smugly). I’m not convinced it was Hilton’s point to champion the merits of moderation, at least not to the extreme levels of Shangri-La (again smiling smugly), but rather to point out that British values of action, results, and ambition, might benefit by a bit of moderation. That’s something I can agree with, and why, along with it just being a marvelous adventure, I give Lost Horizon…

Americans, Conway reflected, had the knack of saying patronizing things without being offensive.

I should say that our prevalent belief is in moderation. We inculcate the virtue of avoiding excess of all kinds – even including, if you will pardon the paradox, excess of virtue itself. ~ Chang

Trivia 1: The U.S. Presidential retreat in Maryland was named Shangri-La by President Roosevelt. It was later changed to Camp David by President Eisenhower.

Trivia 2: Ayn Rand’s famous novel Atlas Shrugged also has an idyllic society hidden in an inaccessible mountain valley [Rocky Mountains]. There are similarities so specific as to remove any doubt that Rand borrowed the idea from Hilton – though the ideals espoused by the two societies are as disparate as the mountain ranges that hid them.