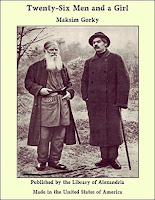 It is the tale of 26 poor laborers, nearly slaves, working in deplorable conditions, long hours, little pay, making and baking kringels. The unnamed narrator speaks for the collective, though they seldom speak among themselves.

But silence is only terrible and fearful for those who have said everything and have nothing more to say to each other; for men, on the contrary, who have never begun to communicate with one another, it is easy and simple.

Though they do from time to time sing.

While in other men’s words we sing out our dumb grief, the weary burden of live men robbed of the sunlight, the burden of slaves.

But it does little to relieve the drudgery.

Painful and terrible it is when a man goes on living, while nothing changes around him; and when such as existence does not finally kill his soul, then the monotony becomes with time even more and more painful.

They have but one bright spot in their day, when sweet and innocent Tanya, from an adjoining seamstress shop stops by for kringels. Tanya is pleasant without being coquettish – indeed, she wouldn’t know how to be; she is a picture of innocent beauty.

Better than her we had none, and none but her took any notice of us…

But about our Tanya we never let fall an evil word; none of us ever ventured so much as to lay a hand on her, even too free a jest she never heard from us. Maybe this was so because she never remained for long with us; she flashed on our eyes like a star falling from the sky, and vanished; and maybe because she was little and very beautiful, and everything beautiful calls forth respect, even in coarse people.

We loved her – all is said in that.

But I've already hinted, it's The previous excerpt is the sweet.

The bitter – I haven’t the heart, and I’ll spare the spoiler.

Still, Gorky’s words are lovely. I’ve never read him before, and I will be sure to read more. He was a pioneer of social realism. I’ll expect more painfully sweet stories.

I don’t usually review a single short story. Sometime soon, I hope to get to a collection by Gorky. Have you read Maxim Gorky? What did you think? 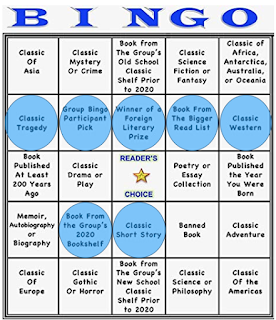 This satisfies, N-4, Classic Short Story, from the 2020 Classic BINGO Challenge.
Posted by Joseph at 5:22 PM