The Stranger by Albert Camus (novel #155) 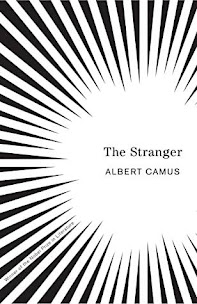 "I have never been able really to regret anything in all my life." ~ Meursault, The Stranger
I had no idea what to expect from The Stranger. I knew it was a thesis to some extent for Camus’ philosophy of absurdism, but that had very little meaning for me. Blissfully ignorant I began.
Blissful didn’t last long. It begins with the main character, Meursault, learning of his mother’s death and departing for her funeral. Set in Algeria, mid 1940s, it details a few days, and then a year or so in the life of French Algerian Meursault.
The reader begins to see Meursault is a man without great passion or emotion. He goes through some of the motions of mourning, but doesn’t really seem to mourn. It isn’t as though he had a bad relationship with his mother, he professes to have loved her and to have got along. He is just indifferent to her passing.
This blasé attitude is the mark of Meursault. The day after the funeral he begins, or perhaps renews, a relationship with a girl from work, goes to the beach, goes to a comic film, and shows no sign of mourning. When his girl, Marie, asks him to marry her, he flippantly agrees, but later when she asks if he loves her, he responds, "I suppose I don’t" – but he’s still willing to marry her. It doesn’t mean anything to him.
Meursault’s aloof attitude toward life culminates when he kills an Arab. The first fatal shot is probably self-defense, but after pausing…

…I fired four more shots into the inert body, on which they left no visible trace. And each successive shot was another loud, fateful rap on the door of my undoing.

Meursault is arrested and tried. The most damning evidence being his indifference to his mother’s death, and indifference to everything.
Meursault is Camus’ embodiment of absurdism – the futility of seeking meaning or value from life. As such, I thought Meursault and the novel do a fair job of portraying absurdism, but do nothing to convince me of its merits; in fact, quite the opposite.
I pondered the title, and I suppose Meursault is the stranger – a stranger from humanity. I can’t say I enjoyed it, but I did find it interesting and well written. I’ll read more by Camus, but certainly with a predisposition next time.
My rating: 3 of 5 stars

This novel satisfies square G5, Classic Science or Philosophy (Absurdism) in the 2020 Classic Bingo Challenge, and Classic in Translation (from French) for the Back to the Classics Challenge 2020.
.
Posted by Joseph at 5:03 PM