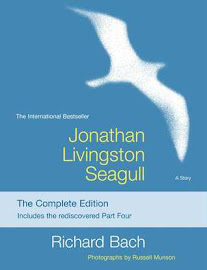 "For this gull, though, it was not eating that mattered, but flight. More than anything else, Jonathan Livingston Seagull loved to fly."

Jonathan Livingston Seagull is a fable about the eponymous hero of the tale, who unlike the other members of his flock, desires more out of life than mere existence and the search for food. As the quotation reveals, Jonathan loved to fly – and at great personal cost, pursued new techniques for higher and faster flight.

I first read this when I was 11, when it was on the best-seller list. I thought it was just about the dumbest thing I’d ever read, but of course I was 11, not well read, and pretty dumb myself. I’ve experienced other reads I thought were dumb in my youth that I now think are masterpieces (The Little Prince) so I thought perhaps Jonathan Livingston Seagull would appeal more now that I am older, wiser, and better read.

I wouldn’t call it the dumbest thing I’ve ever read, but neither would I call it a masterpiece. There is charm to the writing and Jonathan is sincere and likeable. He flies in the face of convention (pun intended) to achieve greatness, and for that, serves as a heroic and admirable example, But I believe the intended moral goes well beyond that to a level of philosophic absurdity that I don’t accept.

I read “the complete edition” with the “fourth part” that Bach added in 2014. The fourth part did not improve my opinion.

I am a seagull. I am limited by my nature.

Yet he felt guiltless, breaking the promises he had made himself. Such promises are only for the gulls that accept the ordinary. One who has touched excellence in his learning has no need of that kind of promise.

His one sorrow was not solitude, it was that other gulls refused to believe the glory of flight that awaited them; they refused to open their eyes and see.

…the most important thing in living was to reach out and touch perfection in that which they most loved to do, and that was to fly.