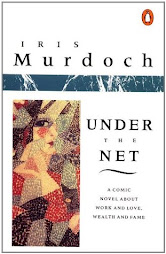 Starting a novel is opening a door on a misty landscape; you can still see very little but you can smell the earth and feel the wind blowing. ~ Jake Donaghue

There are several ways to characterize this: comic novel, picaresque novel, philosophic novel, all accurate, and beautifully written.

It is the first-person narrative of a few weeks in the life of Jake Donaghue. By his own admission, Jake is lazy and unambitious.

I live by literary hack-work, and a little original writing, as little as possible.

He and his faithful companion, Peter O’Finney (Finn), spend more time looking for shortcuts in life, than they would probably spend earning an honest living.

I find it hard to explain to people about Finn. He isn’t exactly my servant. He seems often more like my manager. Sometimes I support him, sometimes he supports me; it depends. It’s somehow clear that we aren’t equals.

The novel could easily have been titled A Tale of Two Cities, but that, of course, was already taken. It opens with Finn meeting Jake at the station as Jakes returns to London from Paris. Jake learns that he and Finn have been turned out of their flat, where they have been living rent-free for over a year. This starts what I would call a non-stop, madcap adventure. Jake, often accompanied by Finn, finds himself – more correctly embroils himself – in one preposterous situation after another: swimming naked in the Thames after drunken pub crawl; a political riot at a movie theater set portraying Rome – resulting in the complete collapse of Rome; breaking and entering to retrieve a stolen transcript, not finding it, and opting to kidnap a movie-star canine to hold for ransom, and more.

This was my favorite aspect of this zany story. Jake repeatedly finds himself in situations that most people will never encounter, and he approaches these all quite casually, as just a day in the life. He is a loveable knucklehead.

There is a ridiculous love quadrangle, and a hodgepodge of marvelous characters, whose names alone signal their peculiarities: Hugo, Lefty, Sammie, Sadie, Magdalen, Jean-Pierre, and Mr. Mars (the dog).

This was not my first read of Iris Murdoch, though I’d forgotten she also wrote The Sea, the Sea. Both stories she writes from a first-person male narrator, and her writing, both dialogue and narration, is simple, relatable, and beautiful. (see excerpts)

I was a little disappointed in the ending – at first. But after I slept on it, my opinion definitely improved. The entire escapade serves as a sort of epiphany for Jake and I can’t help but feel hopeful for him. I’m certain, the entire plot is a treatise on Murdoch’s philosophy – but it’s not so in-your-face off-putting as to interfere with a good story.

I’ll definitely read more by Murdoch. Have you read Under the Net? Iris Murdoch? What are your thoughts?

Finn was sitting near him on the floor with his back to the wall and his legs stretched out like the victim of an accident.

My heart sprang within me and fell like a bird striking a window pane.

Dave once said to me that to find a person inexhaustible is simply the definition of love, so perhaps I loved Anna.

“Watch out for police,” said Lefty. “They’ll think we’re going to rob a warehouse. If you see one, pretend to be drunk.”

This was rather superfluous advice.

Out of this undulating pile of punching, kicking, and wrestling humanity there arose a steady roar in which cries of pain and anger were inextricably merged.

Even when I don’t know which side I am on I hate to watch a fight without joining in.