Uncle Tom’s Cabin or Life among the Lowly 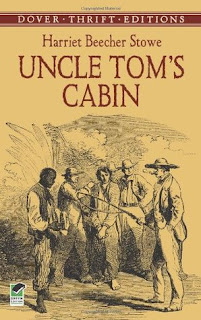 O, ye who take freedom from man, with what words shall you answer it to God?

Much of the time I was reading this, I was thinking it was not a very cheerful read for the season of Good Cheer (I finished it Christmas Day).

And indeed, it is not – for it is filled with cruelty, heartache, and injustice, but I am glad to have read it this season nonetheless, for it also speaks of love, victory, and redemption.

I think most novels are part entertainment, and part thesis. This is one of those novels that although the story is agonizingly captivating, the message is of the greater import.

First the story: It is about the overpowering desire for freedom, told via the desperate escape of the slave Eliza, and the long enslavement of Tom – Uncle Tom. Both win their liberty – by very different roads. Eliza’s ending is almost Dickensian, as improbable coincidence, lends a hand to the sublimely satisfying ending. (It is possible that Stowe was familiar with Dickens, though I have not read that she was).

The story was satisfying, though heartbreaking along the way, and any satisfaction is quickly tempered when remembering the sixty million. Stowe’s passion adds credence to the characters, whether the slaves themselves, the slave owners, the traders of human souls, the hunters, or the criminal abettors of liberty. One of the most interesting characters is St. Clare, a New Orleans slave owner, who abhors the institution, but feels impotent to change it. He deludes himself that he is trapped in it by necessity. He has several insightful conversations with his abolitionist cousin, such as…

“The short of the matter is, cousin.” Said he, his handsome face suddenly settling into an earnest and serious expression, “on this abstract question of slavery there can, as I think, be but one opinion. Planters, who have money to make by it, – clergymen, who have planters to please, – politicians, who want to rule by it, – may warp and bend language and ethics to a degree that shall astonish the world at their ingenuity; they can press nature and the Bible, and nobody knows what else, into the service; but, after all, neither they nor the world believe in it one particle the more. It comes from the devil, that’s the short of it; – and, to my mind, it’s a pretty respectable specimen of what he can do in his own line.”

To the point that the story, is not merely a story; Uncle Tom’s Cabin is Stowe’s exposé on the evils of slavery and the guilt of both North and South. In the final chapter, which is not really a chapter of the story, but her treatise on the subject, she writes:

Both North and South have been guilty before God; and the Christian church has a heavy account to answer.

…not surer is the eternal law by which a millstone sinks in the ocean, than that stronger law, by which injustice and cruelty shall bring on nations the wrath of Almighty God!

It was a powerful and dreadful message – one that some claim led to the American Civil War – so be it!

Stowe’s logic had one minor weakness. Occasionally, she made generalizations about the slave-race, such as…

They are not naturally daring and enterprising, but home-loving and affectionate.

Which is simply a prejudicial stereotype…benevolent, but a stereotype no less than more sinister ones like: they are better off as slaves in America than they would be free in Africa…a common delusion of the day. Or that…

The intention of Providence that the African race should be servants,…

Stereotypes notwithstanding, is it an important and heroic work.

This was my book for The Classics Club Spin # 25.

“I’s willin to lay down my life, this blessed day, to see Mas’r a Christian.”

Is not the senseof liberty a higher and a finer one than any of the five?

There is no monument to mark the last resting-place of our friend. He needs none! His Lord knows where he lies, and will raise him up, immortal, to appear with him when he shall appear in his glory.

What a fool is he who locks his door to keep out spirits, who has in his own bosom a spirit he dares not meet alone,…