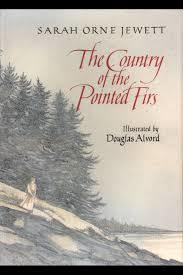 At sea there is nothing to be seen close by, and this has its counterpart in a sailor’s character, in the large and brave and patient traits that are developed, the hopeful pleasantness that one loves so in a seafarer.

The country – the one with the pointed firs – is Dunnet Landing, a small fishing community on the coast of Maine. The story – some say it is not a story (novel), but rather a series of sketches – is told by a summer visitor, an unnamed writer from Boston, who visited once before, and presumably finds the setting quaint and quiet, and perhaps conducive to her creative process.

If you ask me – I note that you did not; I’ll try not to be hurt – but if you ask me, this is a novel. It flows sequentially, and although it is mainly character driven, giving it the feel of sketches, there is still a plot: a comfortable, cozy plot, though rather subtle.

The characters are the charm. The main character, the widow Almira Todd, the narrator’s host and landlady, is herbalist and apothecary to the village, liked and trusted by all, including the village doctor. Mrs. Todd is 67 full of candid observation and homespun wisdom.

Mrs. Todd gave a funny little laugh. “Yes’m, old friends is always best, ‘less you can catch a new one that’s fit to make an old one out of,” she said, and we gave an affectionate glance at each other…

Mrs. Blackett was of those who do not live to themselves, and who have long since passed the line that divides mere self-concern from a valued share in whatever Society can give and take.

Tact is after all a kind of mindreading, and my hostess held the golden gift. Sympathy is of the mind as well as the heart, and Mrs. Blackett’s world and mine were one from the moment we met.

Then there is Captain Littlepage, well-read, quoting Milton and Shakespeare, and just a wee bit mad.

He waved his hand toward the village below. “In that handful of houses they fancy that they comprehend the universe.”

There is the legend of Joanna Todd, cousin of Mrs. Todd’s husband, the jilted lover who became the hermit of Shell Heap island, which is now her resting place.

If the characters are the charm, Jewett’s writing and the subtle plot are the beauty. The narrator, from the big city, knows she is not part of the community.

…but I had now made myself and my friends remember that I did not really belong to Dunnet Landing.

But over time, and somehow in spite of the reputation that small communities are aloof and wary of outsiders, she wins their trust and affection.

I came near to feeling like a true Bowden, and parted from certain new friends as if they were old friends; we were rich with the treasure of a new remembrance.

I heard the words “next summer” repeated many times, though summer was still ours and all the leaves were green.

There may be restrictions to such a summer’s happiness, but the ease that belongs to simplicity is charming enough to make up for whatever a simple life may lack, and the gifts of peace are not for those who live in the thick of battle.

***sigh*** This book left me longing for the simple life and the gifts of peace, and specifically for a quiet New England seashore – though in summer, definitely in summer.

This novel satisfies a classic by a woman author for the Back to the Classics 2021 Challenge, and title with botanical word for the What’s in a Name 2021 Challenge