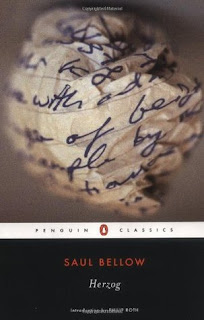 If I am out of my mind, it’s all right with me, thought Moses Herzog ~ opening line

At first, I thought Herzog was clearly not out of his mind. He is lucid, intelligent, and philosophical, but over time I began to wonder about him even as he wonders about himself.

Was he a clever man or an idiot?

Moses Herzog is a middle-aged Jewish man, author, professor, and philosopher. He has suffered two failed marriages: the first to Daisy – just sad; the second to the manipulative and vindictive Madelaine who seems intent on ruining him socially and professionally.

But then – as noted – Herzog may be mad. He is certainly not a reliable narrator, and this novel is very nearly one long monologue of his thoughts and words.

And his letters. Herzog writes LOTS of letters; he seldom sends them. They are to famous persons: President Eisenhower, Martin Luther King, Churchill, Nehru, Spinoza – oh yeah – some not even alive. Others are to family, friends, doctors, local politicians. All reflect Herzog’s discontent, and I’d say his fixing of blame on anyone and everyone but himself.

I liked Herzog at first; I thought he was the victim. Indeed, in spite of his unreliability, it is clear that Madelaine was pretty awful. But Herzog was his own worst enemy, and engages in far too much navel gazing.

But I, a learned specialist in the intellectual history, handicapped by emotional confusion…Resisting the argument that scientific thought has put into disorder all considerations based on value…Convinced that the extent of universal space does not destroy human value, that the realm of facts and that of values are not eternally separated.

One rather insignificant discourse he had with a friend. The friend with emotional problems of his own, recounts how devastated he was by the death of his pet monkey. Herzog muses:

A man could do worse than to love his monkey...

Maybe it wasn’t insignificant. Herzog had done worse. I still have some sympathy for the fellow. He has a couple crises, including homicidal thoughts, and later arrest, but in the end, perhaps the navel gazing did some good. He seems to find some balance. He quits writing letters, takes responsibility for his life, and under the watchful eye of a loving brother – the reader thinks there may be some hope for Herzog yet.

I've read one other work by Saul Bellow [The Adventures of Augie March] which I enjoyed. This one, not as much.

This novel satisfies a 20thCentury classic for the Back to the Classics 2021 Challenge.