Devil in a Blue Dress by Walter Mosley (novel #176) 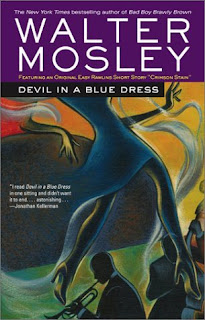 It was those two days more than any other that made me a detective. ~ Easy Rawlins

I didn’t enjoy my last two reads; one was DNF, the other 2 Stars.

So, I modified my planned schedule, for something fun and “easy” (pun intended), The main character is Easy Rawlins, the hard-boiled detective in Walter Mosley’s mystery-noir series.

This novel introduces Ezekiel “Easy” Rawlins, and the caper that accidentally made him a P.I. Easy is an African-American, WWII veteran, living in Los Angeles county late 1940s. Out of work and desperate to make his mortgage, he takes work from a shady character – a not too many questions type of job, to simply find a girl and report her whereabouts. Easy has no training as a private detective, but he is street-wise, tough, and unattached, so he takes the job. The girl, as you might infer from the title, is a femme-fatale, whose association doesn’t seem to do anyone, including Easy, any good.

Easy's character, and this series is considered barrier breaking, with the African American lead – but honestly, it doesn’t read like Mosely is trying to make that point, or force that issue. It’s just good clean fun – well, R-rated at a few points, but quite entertaining.

I ready mostly classics, and this probably cannot be considered classic (maybe someday), mostly because it is fairly recent. In spite of the 1940s setting, it was published in 1990. The setting for the Easy Rawlins series, Mosley’s most popular, continues into the late 1960s. I’ll probably read more in the series, especially when I’m in need of something fun and easy.

This novel satisfies a book with an article of clothing in the title, for the What’s in a Name? 2021 challenge. I had to come up with an alternate title, after I threw The Ragged Trousered Philanthropists onto the DNF pile.

By the time the sun went down I was at peace with myself. I had a name, and address, a hundred dollars, and the next day I’d go ask for my old job back. I had a house and an empty bottle of vodka that had made me feel good.