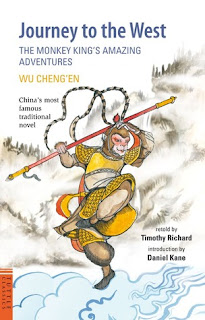 Journey to the West: The Monkey King’s Amazing Adventures

Journey to the West is one of China’s Four Great Classical Novels, along with Dream of the Red Chamber, Romance of the Three Kingdoms, and Water Margin.

It is a highly-fictionalized story of Xuanzang, a 7th Century Buddhist monk, who made a journey from Chang’an China to India, in search of the highest and truest tenets of Buddhism, that he felt had been lost in Chinese Buddhism. It was written in the 16thCentury during the Ming Dynasty by Wu Cheng’en. My version was translated by Timothy Richard, a Welsh Baptist missionary to China in the late 19th, early 20thCentury.

It can be taken as a simple adventure story, but can also be interpreted as an allegory for a pilgrim seeking enlightenment. And while it is primarily about Buddhism, it also asserts “the three religions [Buddhism, Taoism, Confucianism] are really one.”

As I said, it is highly fictionalized. In this story, Xuanzang is accompanied by a monkey, a pig, another monk, and a horse.

As the subtitle suggests, this tale is more about the monkey than Xuanzang. The monkey, Sun Wukon is half-monkey, half-man. He is boastful and powerful in magical combative arts. He can change into just about any form of man or beast, can create hundreds of copies of himself, can grow to 100,000 feet tall, and can travel to Hell or Heaven, or leap across continents. He was imprisoned under a mountain for 500 years, for causing trouble in Heaven. After he is released by Xuanzang, Sun Wukon serves him on his quest.

The pig, Zhu Bajie, was also cast out of Heaven and reborn as half-pig. He is magical, but not nearly so powerful as Sun Wukon. He is a hedonist, and serves Xuanzang for penance. The monk Sha is a disciple of Xuanzang, and the horse is actually a dragon turned into a horse to bear the pilgrims burdens.

They encounter numerous deities and demons on the 14 year journey of nearly 6,000 miles. The demons try to eat Xuanzang to gain immorality. Sun Wukon fights and subdues them, and in the next chapter, the same thing happens again.

You can probably tell I didn’t like it, but I’m glad to have read it for its historical significance. I don’t think I’m qualified to critique though, as I believe much is lost in translation – both literal and cultural translation. Chinese storytelling sometimes employs a technique that doesn’t appeal to my western senses. The narrative of events is often quite abrupt, while the descriptions of persons or objects is excessively ornate.

This novel satisfies – classic by a black, indigenous, person-of-color author in the Back to the Classics Challenge 2021