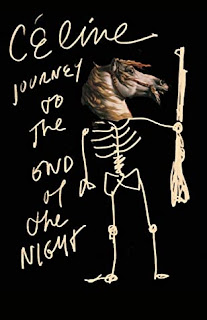 Journey to the End of the Night by Louis-Ferdinand Céline

(translated from the French by Ralph Manheim)

I had tried to lose myself, I hadn’t wanted to be face to face with my own life anymore, but everywhere I kept finding it. ~ Ferdinand Bardamu

The “journey” is that of Ferdinand Bardamu, and courses through the First World War, colonial Africa, the United States, and concluding in the suburbs of Paris, where Bardamu is a doctor. It is semi-autobiographical.

And utterly depressing. Bardamu is a cynic and pessimist, and holds humanity, including himself in contempt. Everything is stupid, worthless, pointless.

The only person in the book worse than Bardamu is Robinson, a fellow soldier he meets during the war – the two of them trying, and failing to surrender, to avoid further mindlessness of war. Bardamu and Robinson’s paths are fated to cross time and time again – in Africa, in the U.S., and back in Paris.

My analysis of Céline’s point, though one I admittedly don’t care to waste much time on, I already wasted too much time reading this book, seems to be that life is a journey – a journey of night and darkness, the end of the night is death. The main character, and Céline I presume, consider death a relief from the misery of life.

Point made – and rejected. Moving on. The first I’ve read by Céline, undoubtedly the last. And the cover's weird.

This novel satisfies “a classic in translation”, in the Back to the Classics 2021 Challenge.

Most people don’t die until the last moment; others start twenty years in advance, sometimes more. Those are the unfortunates.

While the war was still on, the seeds of our hateful peace were being sown.

The plain truth, I may as well admit it, is that I’ve never been really right in the head.

There ought to be some mark by which to distinguish good people from bad.

I’d always worried about being practically empty, about having no serious reason for living. And now, confronted with the facts, I was sure of my individual nullity.

We kid ourselves, people have nothing to say to one another, they all talk about their own troubles and nothing else.

I had cast off all self-respect long ago. That sentiment had always struck me as far above my station, much too costly for my resources. I’d made that sacrifice once and for all and had no regrets whatever.