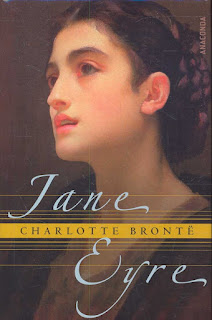 "Dread remorse when you are tempted to err, Miss Eyre; remorse is the poison of life."

"Repentance is said to be its cure, sir."

This was the first time I’ve read Jane Eyre or Charlotte Brontë. The novel is a Victorian era, romance/mystery. It is the third-person narrative of Jane Eyre, in late 18th, early 19th century England.

The only way I could have enjoyed Jane Eyre more is if I did not know secret behind the eerie mystery at Thornfield Hall, spoiled by a film version I watched some years ago.

The novel opens during Jane’s orphaned childhood. She is taken in by a loving Uncle, but he soon dies and you know the rest of that story…evil aunt, evil cousins, etc. Evil is a strong word, and I use it only for affect. They were pretty horrible though. Jane is not at this point, quite the angel she will become, but she has a keen sense of justice and the reader suffers for her. I was relieved when she was sent off to a “charitable” boarding school for girls, though with trepidation, as Jane’s aunt, defames her to the schoolmaster.

In spite of this, life is still more pleasant at school, though not without hardship and privation. The schoolmaster is cruel and miserly, but fortunately seldom present. The kindly superintendent does the best she can for the girls, and Jane befriends a sweet girl, Helen Burns, who is older and sickly, and you might guess how that ends.

But Jane Eyre is anything but predictable from this point on. Helen is positively angelic, and she leaves an indelible mark on Jane, who grows to be a gracious, gifted young woman. She teaches at the school for a while, but longs to know more of the world, and takes a position as governess to Adele, the young ward of the wealthy lord of Thornfield Hall.

Jane is well paid, well treated, and very well liked, by her student and the other servants at Thornfield. She begins to truly blossom and settles into a contented, well ordered routine. But there is an eerie mystery at Thornfield that manifests itself infrequently. I would have found this maddeningly intriguing, except for the movie. I would dearly have liked to read it without knowing.

The master of Thornfield, Mr. Rochester, is not home for Jane’s first few months. When he returns, well there is of course the love story. The hopeless love story. So hopeless, by the difference in their stations and other impediments that neither Jane nor Mr. Rochester seem to know they are in love. But of course, the reader knows. And the reader is hopeful, because after all, silly British traditions of class and keeping to one’s station are…well…silly, and the reader is certain they will be overcome.

But, in context it wasn’t so silly, and it was probably a very big obstacle. Still, Brontë clearly approves of the match, so I think even in her time, she must have intended the readers to hope.

What next? No spoilers.

I loved this book. There is a continuous contest between self-indulgence and moral piety, between situation ethics and immutable righteousness, between hypocrisy and sincerity. Brontë does a masterful job, indeed an uncanny job of making these dilemmas genuine. It is perhaps easy for you, dear reader, to read the words and think the choices clear. But reading Jane Eyre, and feeling her conflict, and longing for her happiness, there were times when I wanted to tell her: just be happy Jane, you deserve it. Jane was not so weak, though she did peer longingly over the brink on more than one occasion.

And finally….THE MOST GLORIOUS final line of any of the novels I have read thus far, or that I shall read.

Amen; even so come, Lord Jesus!

This was very pleasant; there is no happiness like that of being loved by your fellow-creatures, and feeling that your presence is an addition to their comfort. ~ Jane

Is it better to drive a fellow-creature to despair than to transgress a mere human law, no man being injured by the breach?

Jane’s thoughts in preparing her response:

Laws and principles are not for the times when there is no temptation: they are for such moments as this, when body and soul rise in mutiny against their rigor; stringent are they; inviolate they shall be. If at my individual convenience I might break them, what would be their worth? They have a worth, so I have always believed…

The soul, fortunately, has an interpreter, often an unconscious, but still a truthful interpreter, in the eye. ~ Jane

To live amidst general regard, though it be but the regard of working people, is like sitting in sunshine, calm and sweet; serene inward feelings bud and bloom under the ray. ~ Jane

Glorious discovery to a lonely wretch! This was wealth indeed! Wealth to the heart! ~ Jane discovering she had living relatives

References to other classic novels: As a child Jane begins to read Gulliver’s Travels.

Trivia: Did you know there is a prequel to Jane Eyre? The Wide Sargasso Sea by Jean Rhys

Movie Rendition: 2011 version with Mia Wasikowska as Jane, and Michael Fassbender as Mr. Rochester was very good. I thought Wasikowska was perfect as Jane. The rest of the casting was very good, as were the film locations. The movie was pretty faithful, but I was disappointed on two points. First, the mysterious presence at Thornfield Hall was inadequately portrayed. Secondly the ending was too abrupt. There was marvelous dialogue at the end of the novel, which was omitted in the film. In fact, make it three points. The brilliance of Jane Eyre is the dialogue, and too much was omitted in this film version. Skip the movie, read the book.