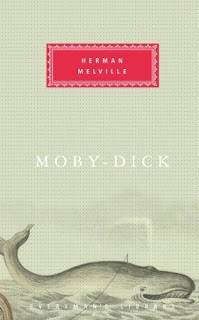 Moby Dick's no devil; he's a whale, a monstrous big whale aye, but a whale no more. And we're whaling men no less. We do not turn from whales, we kill em. ~ Starbuck

I cheated with the opening quotation; it is not from the book, but from the 1956 film.

This is the second time I’ve read Moby Dick, and the only thing I’ve read by Melville. The novel is from the romance period, told by the first-person narrator, Ishmael. It is an epic tale of man vs beast, set mostly aboard a 19th century whaling ship.

I first read Moby Dick approximately 20 years ago. I enjoyed it more this second time, but still found it tedious in spots. If you’ve read it, you probably know all about those spots: those chapters when Melville departs from the story, to educate the reader on cetology (study of whales), shipboard life, nautical matters, or other subjects related to the story, but NOT…The Story. In my opinion, The Story suffers in the telling for those numerous and detailed reference chapters.

SPOILER ALERT: This review contains a spoiler. But seriously, is there anyone that doesn’t know how Moby Dick ends?

Moby Dick is the story of Ahab, a 19th century whaleboat captain, obsessed with hunting and killing Moby Dick, the enormous albino whale that took one of Ahab’s legs on a previous whaling voyage. The story is told by Ishmael, an otherwise insignificant sailor aboard the Pequod, who will be the only surviving member of the doomed crew.

Let me admit at the start that I am not a fan of Ahab’s quest. It is vainglorious, reckless, and selfish. I’ve heard some call it a battle of good vs evil. I beg pardon, but that’s absurd. Moby Dick is neither good nor evil, but a brute beast. He is dangerous and vicious in the face of man, his only predator, but without malice. He fights to survive, and destroys his would-be destroyers. Ahab may very well perceive evil in Moby Dick, but then – Ahab is mad.

If there is a contest of good vs evil, the evil is Ahab’s monomaniacal quest and the good is the opposition posed by the chief mate Starbuck. Though, I don't believe this is really Meliville's point.

For me, Moby Dick is a tragic allegory to illustrate the words of Solomon…Vanity, vanity, all is vanity. Ahab was vain and proud and it led to his ruin. Unfortunately, it also led to the ruin of all his crew, save one.

If I disliked how Melville described the banality of whaling life, I loved how he described his characters.

The first mate Starbuck, was a native of Nantucket, and a Quaker.

Uncommonly conscientious for a seaman, and endued with a deep natural reverence, the wild watery loneliness of his life did therefore strongly incline him to superstition; but to that sort of superstition, which in some organizations seems rather to spring, somehow, from intelligence than from ignorance….Starbuck was no crusader after perils; in him courage was not a sentiment; but a thing simply useful to him, and always at hand upon all mortally practical occasions. Besides, he thought, perhaps, that in this business of whaling, courage was one of the great staple outfits of the ship, like her beef and her bread, and not to be foolishly wasted.

I could tell you more of Starbuck. Indeed, I want to. He was my favorite, the noble, pitiable mate bound to the fate of Ahab by the laws of sailors. But now at least, you know from whence your coffee derives its name.

By contrast, Stubb the second mate was a Cape Cod man.

A happy-go-lucky; neither craven nor valiant; taking perils as they came with an indifferent air….Good-humored, easy, and careless, he presided over his whaleboat as if the most deadly encounter were but a dinner, and his crew all invited guests.

And the third mate Flask, a native of Tisbury, in Martha’s Vineyard.

A short, stout, ruddy young fellow, very pugnacious concerning whales, who somehow seemed to think that the great Leviathans had personally and hereditarily affronted him; and therefore it was a sort of point of honor with him, to destroy them whenever encountered.

There are three harpooners: Tashtego, Dagoo, and Queequeg an aboriginal, tattooed giant, who becomes a great friend of the narrator. Ishmael described Queequeg on first meeting:

...his countenance yet had a something in it which was by no means disagreeable. You cannot hide the soul. Through all his unearthly tatooings, I thought I saw the traces of a simple honest heart; and in his large, deep eyes, fiery black and bold, there seemed tokens of a spirit that would dare a thousand devils. And besides all this, there was a certain lofty bearing about the Pagan, which even his uncouthness could not altogether maim. He looked like a man who had never cringed and never had had a creditor.

The story is filled with irony, foreshadow and symbolism. Such as the seemingly crazed “prophet” Elijah who warns Ishmael and Queegqueg that they will come to ruin if they join Ahab’s crew. A gold doubloon nailed to the mast and offered to the first man to spot Moby Dick, a seahawk that steals Ahab’s cap, and the nine other ships the Pequod met on her voyage. There was the miserable crew of the Delight, after a recent and fatal encounter with Moby Dick, or the desperate Rachel, searching for a lost boat carrying the captain’s son, or "...Rachel, weeping for her children, because they were not". There are other omens, I am certain, that were lost on me. Last, and certainly not least, there is the coffin that would serve as lifeboat.

Overall it was a compelling tale, albeit depressing. I enjoyed it quite a bit, when Ishmael was truly telling the tale. I could have done quite well without the reference chapters. There was no hero. Starbuck is wise and admirable, but powerless to avert disaster. Ahab? As Don Quixote made me sad for his wasted life, Ahab made me angry, for wasting not only his own, but his crew's.

Moby Dick reminds me of Frankenstein: the mad obsession of Ahab and Dr. Frankenstein leads to the ruin of both.

Bildad one of the Pequod’s owners, giving instruction to the crew before setting sail:

Don’t whale it too much a’ Lord’s days, men; but don’t miss a fair chance either, that’s rejecting Heaven’s good gifts.

Ahab in a speech to the crew:

Aye, Aye! And I’ll chase him round Good Hope, and round the Horn, and round the Norway Maelstrom, and round perdition’s flames before I give him up. And this is what ye have shipped for men! To chase that white whale on both sides of land, and over all sides of earth, till he spouts black blood and rolls fin out. What say ye, men, will ye splice hands on it, now? I think ye do look brave.

Ahab: I will dismember my dismemberer.

A sea shanty, sung by Stubb during a perilous storm:

To sailors, oaths are household words; they will swear in the trance of the calm, and in the teeth of the tempest.

Is heaven a murderer when its lightning strikes a would-be murderer in his bed, tindering sheets and skin together? And would I be a murderer, then, if….

all the individualities of the crew, this man’s valor, that man’s fear; guilt and guiltiness, all varieties were welded into oneness, and were all directed to that fatal goal which Ahab their one lord and keel did point to.

Great God! But for one single instant show thyself. cried Starbuck; never, never wilt thou capture him, old man…in Jesus’ name no more of this, that’s worse than devil’s madness. Two days chased; twice stove to splinters; thy very leg once more snatched from under thee; thy evil shadow gone…all good angels mobbing thee with warnings: what more wouldst thou have? Shall we keep chasing this murderous fish till he swamps the last man? Shall we be dragged by him to the bottom of the sea? Shall we be towed by him to the infernal world? Oh, oh,…Impiety and blasphemy to hunt him more!

Starbucks sensing the crew is doomed:

I misdoubt me that I disobey my God in obeying him! (him being Ahab)

Some men die at the ebb tide; some at low water; some at the full of the flood; and I feel now like a billow that’s all one crested comb, Starbuck. I am old; shake hands with me, man. Their hands met; their eyes fastened; Starbucks’s tears the glue. Oh, my captain, my captain! Noble heart…go not…go not! See, it’s a brave man that weeps, how great the agony of the persuasion then!

Film Rendition: I watched the 1956 version with Gregory Peck as Ahab. This is a pretty good rendition. For time, it cut a great deal out, but still portrayed most of the salient scenes. The 2015 film, In the Heart of the Sea, based on the true story of the whaling ship Essex, Melville's inspiration for Moby Dick, was interesting, but a bit disappointing.