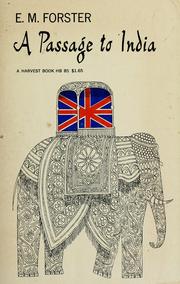 When his spirits were up he felt that the English are a comic institution, and he enjoyed being misunderstood by them. ~ Dr. Aziz

This is the first time I’ve read A Passage to India or E.M. Forster. The novel is a third-person narrative set in the fictional town of Chandrapore in northeast India. It takes place under British Raj (rule), in the early 1920s and involves relationships between members of the Anglo-Indian community. I think you could call Forster’s writing modernist and/or humanist in style. He is also part of the Bloomsbury Group.

I had no idea of the plot other than the obvious: that it had something to do with India. I’m just uncannily perceptive that way. The story is about a rare friendship between an Indian and a Britton. The Indian, Dr. Aziz, is a Muslim physician who was skeptical that Indians could befriend the British until he meets Cyril Fielding the headmaster of the government-run college for Indians. Dr. Aziz finds Fielding to be progressive, accommodating, and unprejudiced. Their newfound friendship is put to the test when Dr. Aziz is accused of assaulting Adela Quested, a young unmarried British woman.

Miss Quested only recently arrived in India to consider marriage to the British magistrate, Ronny Heaslop. Most of the British make no effort to understand Indian culture or custom, but Miss Quested wants to experience “the real India”. To that end, Dr. Aziz arranges a trip to a local tourist spot, the Marabar Caves. However, things go badly at the caves and Miss Quested accuses Dr. Aziz of assaulting her.

Dr. Aziz is not likely to get a fair trial in the British system, but a trial ensues and pent up racial tensions erupt. Fielding is vocal about his belief in Dr. Aziz’ innocence and is ostracized by his compatriots. In spite of this loyalty, the trial puts the friendship between Fielding and Dr. Aziz to an agonizing test.

Fallout from the trial destroys several relationships, and damages others. Years later, one of the principal characters opines that Indians and British cannot be friends until India is free of British Raj…

Even the earth and the sky seem to say, Not yet.

The prejudice of the British was troubling and almost unbelievable. Yet, I am inclined to believe Forster knew what he was writing about. The ignorance and hypocrisy would be almost comical, if not so maddening. I might have found it less offensive if the characters were just vile human beings who hated anyone different from themselves, but that wasn’t really the case. Most were actually decent people painfully deluded about their own superiority.

For instance, early in the story, Dr. Aziz removes his own collar stud and lends it to Fielding. He does so before other guests arrive for luncheon. Fielding doesn’t know Dr. Aziz gave him the stud off his own collar and Dr. Aziz, trying to be gracious, just hopes his collar doesn’t ride up. Ronny Heaslop notices Dr. Aziz’ collar, but says nothing at the time. Later, and behind Dr. Aziz’ back, Heaslop expresses scorn for Dr. Aziz and his appalling lack of refinement in failing to wear a collar stud.

I’m certain Heaslop genuinely believed that failure to dress in proper British fashion was an indictment of Dr. Aziz’ worth as a human being. But of course, Heaslop was ignorant: ignorant that Dr. Aziz knew how to dress properly, and ignorant of the stupidity of his own ethnocentric prejudices.

The novel serves as an exposé of the ethnocentric beliefs and the resulting abuses of British imperialism. As such, it was highly effective. I thought it was a worthwhile story, important even, but not quite thoroughly enjoyable. There were a few moments that were quite riveting, but at other times it transitioned rather abruptly. Still, I’m glad I read it; it gave me a glimpse of a time and place of which I am largely ignorant.

Narrative regarding Dr. Aziz and a British soldier after they have had a friendly polo match:

They reined up again, the fire of good fellowship in their eyes. But it cooled with their bodies, for athletics can only raise a temporary glow. Nationality was returning, but before it could exert its poison they parted, saluting each other. “If only they were all like that.” Each thought.

Narrative regarding the British official investigating the alleged crime:

He had constantly to remind himself that, in the eyes of the law, Aziz was not yet guilty, and the effort fatigued him.

Interesting choice of words there…not he was innocent until proven guilty, but he was not YET guilty.