Nostromo, A Tale of the Seaboard by Joseph Conrad (44 down 56 to go) 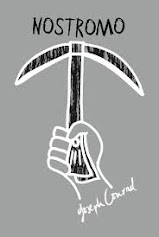 A story of treasure, that was paid for…with the soul of a woman, and the life of a man…

This is the first time I’ve read Nostromo. It is a realist novel, third-person narrative about the scheme to save the silver treasure of the San Tome mine. It is set in a fictional South American country in the late 19th century.

Nostromo takes place in the fictitious South American country of Costaguana. The title character, Nostromo, is a nickname given to Giovanni Battista Fidanza, an Italian sailor who has settled in Sulaco and become Capataz de Cargadores or head longshoreman. It is a story of ambition, idealism, patriotism, corruption, ego, loyalty, and betrayal.

Sulaco is an Occidental Province, isolated from the rest of Costaguana by mountains and the sea. Nostromo has nearly universal respect of the citizens of Sulaco. To his superiors, he is a trusted agent of unquestioned ability and integrity. To the sailors and general population, he commands respect and admiration, and perhaps a little fear. He was…

a man for whom the value of life seems to consist in personal prestige.

...who had lived his own life on the assumption of unbroken fidelity, rectitude, and courage!

However, he is not among the official leaders of Sulaco. The principal character is Charles Gould or don Carlos, the Costaguana born, Englishman and owner/operator of the San Tome silver mine. That might conjure up an image of an aloof and exploitative European, stealing the riches of the land with no regard for the inhabitants, but that would be a false image. Gould is known affectionately as the King of Sulaco, (Rey de Sulaco). He is a fair to his employees, benevolent to the community, and a Costaguanero and idealist at heart. He envisions the wealth of the San Tome mine bringing stability and prosperity to Costaguana. The mine makes a major concession to the government, so it operates to the mutual benefit of all involved.

Control of the mine becomes the objective of the two ruthless brothers and leaders of a military revolution. The isolation of Sulaco, buys some time for Gould and others to plan a daring exploit to smuggle the horde of silver out, and then to enlist internal and external support in hopes of making Sulaco a separate nation, independent of the rest of Costaguana. The plot requires a man of exceptional ability and courage…namely Nostromo. He would make it...

the most famous and desperate affair of my life…

The story starts a bit slow, though it was well worth it. Conrad creates such intriguing and believable characters I was concerned for their safety and felt a patriotic fervor for their beloved and beleaguered Sulaco. Besides Nostromo and Gould, there is Don José Avellanos a leading citizen who suffered cruelly under a previous dictator, who is now unwaveringly devoted to Gould; Avellanos' beautiful daughter Antonia and her fiancé Martin Decoud, who masterminds the plot to save the silver. Decoud has an ulterior motive: not a bad one, not an evil one, just not about the silver, or independence. Then there is the aged Dr. Monygham who also suffered under a previous regime, and now holds very little dear except doña Emilia Gould, the gracious and kind hearted wife of Charles Gould. She was my favorite character. She reminded me a bit of my wife.

And finally, the mysterious Isabels. I'll spare their role in the tale, and let you discover it yourself. It's a very enjoyable story with fascinating characters, exotic lands, intrigue and treasure. You can hardly go wrong with treasure.

In Italian, Nostromo literally means boatswain, but it may also be a corruption of nostro uomo, meaning “our man”. Both meanings fit nicely, and are most likely an intentional play on words by Conrad.

The version of Nostromo I own is illustrated by Paul Hogarth. Below is his rendering of the illustrious title character. 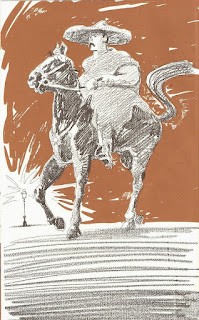 Of course, government anywhere, is a thing of exquisite comicality to a discerning mind

In the most skeptical heart there lurks at such moments, when the chances of existence are involved, a desire to leave a correct impression of the feelings, like a light by which the action may be seen when personality is gone, gone where no light of investigation can ever reach the truth which every death takes out of the world.

The mere presence of a coward, however passive, brings an element of treachery into a dangerous situation.

To him, as to all of us, the compromises with his conscience appeared uglier than ever in the light of failure.

...she resembled a good fairy, weary with a long career of well-doing