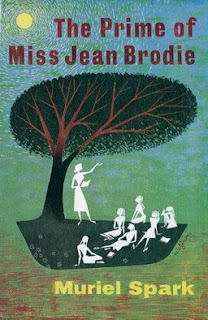 This is the first time I’ve read The Prime of Miss Jean Brodie or Muriel Spark. The story is a modernist, existential novel, set in 1930s, Scotland. It is a novella by most standards, told mostly in third-person narrative, making use of numerous flash-forwards. It recounts the career of Jean Brodie, a progressive teacher at an all-girls school in Edinburgh, Scotland.

In the first chapter or so, I liked the novel because I liked Miss Brodie. By the end, I was not such a fan of her character, which resulted in feeling I did not like the novel. But if I distinguish between the two, I’d say it is a fairly engaging story.

The story focuses on six of Brodie’s protégés, known as the Brodie Set. Miss Brodie only has these girls from age 10 to 12, but she continues to influence them after they are promoted to the next level. The school’s headmistress does not approve and attempts to bring the Brodie set into her own confidence and discover some offense that will be grounds for Brodie’s dismissal, but the girls are aware of her duplicity and guard their words out of loyalty to their mentor.

The narrator describes the girls, each for what they were “famous” for, and how they wore their hats.

famous mostly for mathematics which she could do in her brain, and for her anger…she wore her Panama hat rather higher on her head than normal, perched as if it were too small and as if she knew she looked grotesque in any case.

famous for sex. Her hat was placed quite unobtrusively on her blonde short hair, but she dented in the crown on either side.

famous for her spritely gymnastics and glamorous swimming, had the brim of her hat turned up at the front and down at the back.

wore it turned up all around and as far back on her head as it could possibly go…She was merely notorious for her small, almost nonexistent, eyes, but she was famous for her vowel sounds which, long ago in the long past, in the Junior school, had enraptured Miss Brodie.

She wore her hat with the front brim bent sharply downward; she was the prettiest and most graceful girl of the set, and this was her fame.

whose fame rested on her being a silent lump, a nobody who everybody could blame.

Give me a girl at an impressionable age, and she is mine for life.

And that she would make them the "crème de la crème".

Miss Brodie takes pride in her insight and instinct, extols these virtues, and attempts to cultivate them in her girls. She also repeatedly asserts she is in her prime.

In the beginning, I liked Miss Brodie. She was confident and unbowed by convention. I admired her independent thought and courage. But as the story progressed I realized she had an unhealthy and even dangerous influence over the girls. Miss Brodie had a very cavalier attitude about sexuality, fascist sympathies, and almost complete contempt for anyone who saw the world differently. Slowly, most of the girls drift out of her influence; Miss Brodie settles on Sandy and Rose as her prize pupils. She manipulates the two in a perverse plot to express her love by proxy to the married art teacher while at the same time toying with the affection of the bachelor music teacher. The intricate plot does not go exactly as Miss Brodie plans and eventually one of the Brodie Set betrays her, resulting in dismissal.

Miss Brodie is surprisingly passive though curious about her betrayer, and never learns it was the one girl she was certain it could not be. The girls go about different lives, with different results. One of them writes a book titled, The Transfiguration of the Commonplace. When the author is questioned about the influences in her formative years, she says,

There was a Miss Jean Brodie in her prime.

Miss Brodie describes for her girls, among other things, the interior décor of the London home of A.A. Milne and the love life of Charlotte Bronte.

And she reads to them from Jane Eyre.