Light in August by William Faulkner (60 down 40 to go) 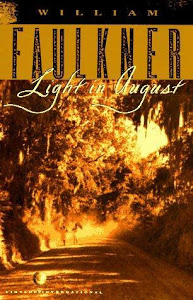 He stepped from the dark porch, into the moonlight, and with his bloody head and his empty stomach hot, savage, and courageous with whiskey, he entered the street which was to run for fifteen years.  The whiskey died away in time and was renewed and died again, but the street ran on. ~ Narrative regarding Joe Christmas

This is the first time I’ve read Light in August, and the fourth novel I’ve read by William Faulkner. Light in August is a southern-Gothic, modernist novel, set in early 1930s, Jefferson, Mississippi, a fictional setting based on Faulkner’s hometown. The location is common to most of Faulkner’s novels and many of his short stories.

I was prepared to dislike this novel because I haven’t been a big fan of Faulkner: The Sound and the Fury, As I Lay Dying, and Absolam, Absolam!. But, you should infer from this ironic foreshadowing, that I found Light in August quite engaging.

I’m happy with the word engaging. In my reviews I’ve often struggled with the words enjoy or like. Think of a miserable novel like Nineteen-Eighty-Four or Under the Volcano. I can’t truly say I enjoyed or liked them. They’re not happy, not hopeful, not uplifting; they’re miserable. But, to borrow from Henry David Thoreau, they are compelling portrayals of the quietly desperate lives of the mass of humanity.

So, I found Light in August engaging. I believe Faulkner has keen insight on humanity, and a gift with words. Another reason I liked this…erm…found this engaging is that it is written mostly in third-person narrative, rather than stream of consciousness.

The story opens on Lena Grove, a poor, white, unmarried, expectant mother traveling by foot from Alabama to Mississippi in search of her child’s father. Lena gives everyone she meets a hopeful story that her “husband” is getting settled and very likely sent for her and that the message got lost in transit. Most of the people she meets are helpful, though dubious, and consider Lena hopelessly naïve and unlikely to find the father.

The reader, this reader at least, got the impression that Lena was not nearly so naïve, but that she kept up the story to avoid anyone’s pity. She was ready to accept help, but prepared to go it alone.

I liked Lena; she was brave and dauntless, as well as resourceful and hopeful.

The story turns to Joe Christmas, who as an infant was left at an orphanage on Christmas morning, hence his name. Even though his parentage is unknown, Joe suspects that he has Negro blood. Consequently he feels a misfit everywhere and is something of a loner and wanderer. He is also brave, but devious, bitter, and desperate.

Lena and Joe never cross paths, but their lives become bizarrely intertwined when Lena finally arrives in Jefferson. On that day the early evening sky is lighted by the flames of a house fire, set to conceal a horrific murder. There is the promise of reward, a fugitive, a manhunt, a birth, a trial, escape, vigilante justice, a new fugitive, and a new manhunt, though no posse this time. The hunters are only two, or three if you count the babe.

The novel ends with circumstances very nearly as they were in the beginning. It isn’t very satisfying, though not without hope. As I implied, it isn’t a happy story, just engaging.

Memory believes before knowing remembers. Believes longer than recollects, longer than knowing even wonders.
…it is a happy faculty of the mind to slough that which conscience refuses to assimilate.
Two of them are also motionless, the woman with that stonevisaged patience of a waiting rock, the old man with a spent quality like the charred wick of a candle from which the flame has been violently blown away.

A minor character’s description of a secondary character that I found amusing:

Then I saw that he was the kind of fellow you wouldn’t see the first glance if he was alone by himself in the bottom of a empty concrete swimming pool.

And this quotation, notable only because it contains a phrase that Faulkner used as the title for a previous novel:

At last the noise and the alarm, the sound and the fury of the hunt, dies away, dies out of his hearing.