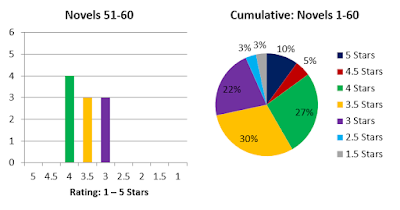 Most interesting/Complex character: Hester from The Scarlet Letter. Honorable mention to Beloved and Pearl (Hester’s daughter)

Best Quotation: All he did was smile and say, “Take care of yourself, Denver.” But she heard it as though it were what language was made for. From Beloved

Honorable mention quotation: …the Cross that took away indignity from suffering and made pain and poverty a means of fellowship with Christ. ~ Bishop Jean Marie Latour from Death Comes for the Archbishop

Best Subtitle: There's only one subtitle in this group, The Scarlet Letter is subtitle: A Romance. I dislike the subtitle though, as I don't consider this novel a romance, though I still consider it a superb novel.

Worst film adaptation: I've only seen a few, and all of them were at least fairly decent portrayals.
Posted by Joseph at 5:15 PM