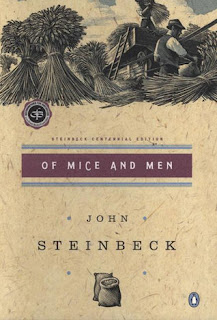 I lot of people hate this tale, but Oh how I love it. It is desperately sad – and beautiful. Don’t let anyone tell you different – it is about unconditional, sacrificial love. Misguided in its action, but love nonetheless.

George came quietly out of the brush and the rabbit scuttled back into Lennie’s brain.

(review from March 11, 2016)
This is the second time I’ve read Of Mice and Men and the third work I’ve read by John Steinbeck. The book is a novella, and the third-person narrative of George and Lennie, two migrant workers trying to make their way in California during the great depression. This book is not part of my 100 Greatest Novels Quest.
George and Lennie are a bit different from most of the migrant workers, because they travel together; they have each other. This distinction is noted by themselves as well as others. George is the brains of the operation. Lennie is a powerful, childlike, giant who always seems to get in trouble, due to his innocence, and George has to get him out – usually by taking it on the lam. The two were probably childhood friends, and George was entrusted with watching out for Lennie, by Lennie’s aunt Clara. The two do the best they can, which isn’t very good, but dream of owning a small farm and

livin off the fatta the lan

A very wise man once said: sorrow holds a beauty that joy will never know.

Of Mice and Men is miserably sorrowful, and poignantly beautiful.

This is not the only paradox. There are two murderers in this tale: one of them is the embodiment of innocence, while the other offers a display of unconditional, sacrificial love.

At a moment when George and Lennie seem to be closer to getting their little farm than ever, Lennie commits his greatest blunder, he accidentally kills a young woman. Out of desperation, and seeing no way out this time, George shoots Lennie to spare him the confused terror he will certainly face when brought to justice.

Let me be clear, George’s terrible, desperate act is morally and legally wrong. I don’t condone it. But George loved Lennie. His action was misguided, but to his simple intellect, and hard worldly wisdom, it was the only course of action to save his friend.

I used the adjectives unconditional and sacrificial; let me explain. Early in the narrative, George is often stern with Lennie. He is like a parent hoping to correct childish foolishness. Again, I would say misguided. His words were too hard, too cruel, too insulting, but I believe he was trying to teach Lennie. And Lennie was after all, exasperating. The unconditional love is evident when Lennie commits his greatest blunder. There is no chiding from George – not a harsh word – just words of comfort. Words to let Lennie’s final moments be happy ones. And sacrificial: The agony it causes George is nearly unbearable. He wasn’t acting for himself. He knew if the mob found Lennie first, Lennie’s final moments would be ones of confused terror. If somehow he survived, he knew the gallows would be more terror, and if somehow the law spared him the death penalty, George knew prison would be slow, unending agony for Lennie.

George loved Lennie. He loved him in a simple, misguided, desperate way. It was heartbreaking and beautiful.