Guest book review by my Grandson Andrew of Mr. Bliss by J.R.R. Tolkien 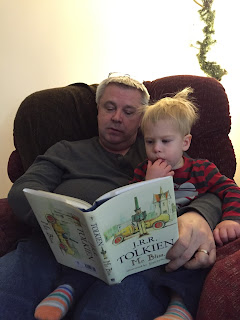 It has been quite a while since any of my grandsons submitted a book review, and Andrew apologizes that this one is so late. We actually read this some months ago, but Andrew’s schedule has been rather hectic with potty training and learning to speak.

Andrew decided to step out of his comfort zone and try a new author, but one he knows is a favorite of Dad and Grandpa.

Andrew feels, Mr. Bliss is written in the modernist style, though it definitely belongs to the magical realism genre. It is the third person narrative of Mr. Bliss. The setting is not explicit, though Andrew believes it is certainly set in Jolly Ole England, mid 20th century. Andrew is aware of Professor Tolkien’s disdain for allegory, but he, Andrew that is, believes there are elements that are so clearly allegorical as to not be denied.

Mr. Bliss is a country gentleman who wears very tall hats. One day he decides to buy a motorcar. His only stipulation is that it be yellow with red wheels. Andrew thought these were excellent choices, particularly yellow, as that is the first color he could recognize and say. Andrew did feel however, that Mr. Bliss was a bit careless not to consider other criteria. Andrew wondered: diesel or petrol, fuel injected or carbureted, front wheel drive or rear wheel, automatic or standard etc. Andrew also felt that Mr. Bliss might have inquired about emissions and considered a hybrid, as he, Andrew, is planning on being around a bit, and is concerned about air quality. Andrew realizes it is fiction, and cannot therefore affect air quality, but he felt that by mentioning this concern, Prof Tolkien might have inspired an increased environmental conscience in his considerable fan base.

At any rate, Mr. Bliss sets off on a drive and has numerous comical adventures. He runs into Mr. Day, upsetting his cabbage cart, and then runs into the widow Mrs. Knight (widow…bit of foreshadowing, the two are eventually married and open a stand called Day & Knights Vegetables), upsetting her banana cart. Bliss takes Knight and Day along for the ride to visit the Dorkinses, but on the way, they run into three bears. Not THE three bears, but a trio of Ursa nonetheless: Archie, Teddy, and Bruno.

Andrew observes that Prof Tolkien likes to make wordplay with names. The bears want the cabbages, bananas, and motor car and threaten to eat Mr. Bliss and company if they fail to acquiesce. The omnipotent narrator reveals the threat was only a bluff.

The party eventually makes it way to the Dorkinses which is a family of healthy eaters, that is they are all quite fat. There is Albert, Herbert, Egbert, and the fattest known only as Fatty. Andrew felt this was unnecessarily unkind. He also notes that one of the quartet could be known as Fat Albert. Andrew thought the Tolkien estate might be able to bring a plagiarism suit if they were so inclined.

As the tale progresses, Mr. Bliss’ actions lead to some rather costly damages around town, and he is presented with a bill of £3 16. 7½ (three pounds, 16 shillings, 7 ½ pence) if Andrew is not mistaken (one of the clues that it all takes place in Jolly Ole England). Andrew loves to refer to England as Jolly Ole England, because – well it seems so jolly.

Constable Sergeant Boffin is called to ensure Mr. B pays. Andrew thought Boffin sounds rather like a Dwarfish name. One minor character in town is identified as Gaffer Gamgee. Andrew had an indistinct feeling that the Gaffer might figure into another Tolkien tale, but he could not say precisely which, having not read any others.

Andrew has thus far intentionally omitted the most fantastic personage of this tale, saving the best for last, as it is. Mr. Bliss keeps a girabbit: a cross between a giraffe and rabbit. The unnamed girabbit has a telescopic neck, fur of macintosh, and is quite blind. Andrew thought making the girabbit blind was a brave bit of writing for a children’s tale, and although it made Andrew a bit sad, the girabbit manages quite well, and quite contentedly. Andrew recognizes the value of including such a feature, as venue to prepare children that people have such distinctions, and they are nothing at all alarming.

Andrew opines that Mr. Bliss is an aptronym, as Mr B seems blissfully unaware of the consequences of his actions. At this observation, Andrew realizes it may be fair to call this a picaresque story as well.

Andrew enjoyed the illustrations by Professor Tolkien, especially the bears and girabbit. Andrew was a little scared of the bears at first, and their threats to eat people. They are not at all like the Berenstain Bears that he is previously acquainted with. But the illustrations made them appear less frightening. Oh and Andrew adds, he liked the picture of the yellow car with red wheels. He wants one.

Andrew gives it 4 of 5 stars

But feels this may not be Professor Tolkien’s greatest work.


Click HERE for more book reviews by my Grandsons and Granddaughters.