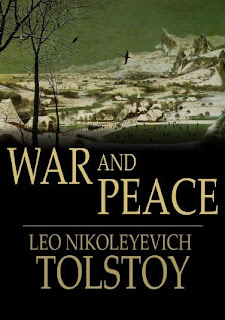 (translation by Louise and Aylmer Maude)

“O Lord, my Creator, Thou has heard our payer”…”Russia is saved. I think Thee, O Lord!” and he wept. ~ Supreme commander of the Russian Army, Prince Kutuzov

This is the first time I’ve read War and Peace and the second novel I’ve read by Tolstoy. War and Peace is a realist novel, historical fiction, third-person narrative set in Russia from 1805-1820, or during the Napoleonic invasion of Russia. It relates the intertwined lives of five Russian aristocratic families.

This novel satisfied category six: an Adventure Classic from the Back to the Classics Challenge 2016.

War and Peace is one of the longest novels ever written, though not the longest as is sometimes asserted. It is curious how it could ever be given such a distinction, as it is not a matter of opinion. I will surmise that it may be because War and Peace may be considered: The greatest long novel and the longest great novel ever written.

At any rate, it is long – 560,000 to 580,000 words depending on translation. It took me a bit more than two months to read and I feel it is quite an accomplishment, something of a literary bucket list item. I probably would have been intimidated, had I not previously read and enjoyed Anna Karenina.

It is challenging to review such a lengthy and complex story. It touches on nearly every theme imaginable. If I must summarize Tolstoy’s half-million words, I’d summarize it thus:

To be fair, there are a few other things going on. To do more justice to the “simple” woman, she is not dim-witted. She is simply without avarice; it nearly ruins her.

And although War and Society is more descriptive, I prefer the later title War and Peace for its poetic quality.

War and Peace is divided into four books, 15 parts, varying number of chapters per part, and two epilogues. The 15 parts switch between accounts of the war and the personal affairs of the five families. A number of the characters join the army, so the war parts are not entirely without family drama.

The war sections use the fictional characters to describe historical battles, maneuvers, tactics, and strategies of the war. They also include numerous historical persons, most notably and most obviously, Napoleon and Alexander I.

The society sections center on the fictional families of:

These three are the main families. All made up of mostly likeable, but definitely flawed individuals. Of lesser importance are the families:

Of course, there are many, many other characters – nearly 600.

Throughout the book, and particularly in the first epilogue, Tolstoy offers philosophical insight and his opinion of the distortion historians have made of the war and personages. I wouldn’t dare try and summarize his views on this complex issue. It’s worth a read though. He makes some very good points, and I believe Tolstoy to be reliable. As a Russian, he did not vilify Napoleon, though he is certainly not his apologist. Tolstoy seems to approve of Tsar Alexander, but is a much firmer defender of Prince Mikhail Illarionovich Golenishchev-Kutuzov, the supreme commander of the Russian Army. Kutuzov is a Russian hero, but some historians blame him for the fall of Moscow. Tolstoy portrays most of the Russian military leadership as motivated by ambition, whereas he portrays the aged, discerning, ambitionless Kutuzov as driven by only one goal: to expel the invading army. Kutuzov was thoughtful and patient, sacrificing even sacred Moscow, that the army would live to fight another day. He was of course, ultimately successful.

It is truly overwhelming to attempt anything more in this review. I find War and Peace is an astonishing literary accomplishment, though not quite the pleasure as Anna Karenina.

At one point, the narrator Tolstoy quotes a favorite Bible verse of mine: "The King’s heart is in the hands of the Lord".  It is from Proverbs 21:1 and continues with…"as rivers of water, he turneth it withersoever he will."

Just as in a clock, the result of the complicated motion of innumerable wheels and pulleys is merely a slow and regular movement of the hands which show the time, so the result of all the complicated human activities of one hundred and sixty thousand Russians and French – all their passions, desires, remorse, humiliations, sufferings, outbursts of pride, fear, and enthusiasm – was only the loss of the battle of Austerlitz, the so-called battle of the three emperors – that is to say a slow movement of the hand on the dial of human history.

His head was burning, he felt himself bleeding to death, and he saw above him the remote, lofty, and everlasting sky. ~ Prince Andrew Bolkonsky

To know Him is hard….For ages, from our forefather Adam to our own day, we labor to attain that knowledge and are still infinitely far from our aim; but in our lack of understanding we see only our weakness and His greatness. ~ a teacher of Count Pierre Buzukhov’s

Natasha was happier than she had ever been in her life. She was at that height of bliss when one becomes completely kind and good and does not believe in the possibility of evil, unhappiness, or sorrow.

Man lives consciously for himself, but is an unconscious instrument in the attainment of the historic, universal, aims of humanity.

This is a long excerpt, but I found it a telling glimpse of the prejudice of Tolstoy, an extraordinary writer whom I ordinarily find fair and objective:

Pfuel was one of those hopelessly and immutably self-confident men, self-confident to the point of martyrdom as only Germans are, because only Germans are self-confident on the basis of an abstract notion – science, that is, the supposed knowledge of absolute truth. A Frenchman is self-assured because he regards himself personally, both in mind and body, as irresistibly attractive to men and women. An Englishman is self-assured, as being a citizen of the best-organized state in the world, and therefore as an Englishman always knows what he should do and knows that he does as an Englishman is undoubtedly correct. An Italian is self-assured because he is excitable and easily forgets himself and other people. A Russian is self-assured just because he knowns nothing and does not want to know anything, since he does not believe that anything can be known. The German’s self-assurance is worst of all, stronger and more repulsive than any other, because he imagines that he knows the truth – science – which he himself has invented but which is for him the absolute truth.

But what is war? What is needed for success in warfare? What are the habits of the military? The aim of war is murder; the methods of war are spying, treachery, and their encouragement, the ruin of a country’s inhabitants, robbing them or stealing to provision the army, and fraud and falsehood termed military craft. The habits of the military class are the absence of freedom, that is, discipline, idleness, ignorance, cruelty, debauchery, and drunkenness. And in spite of all this it is the highest class, respected by everyone.

…he knew that the result of a battle is decided not by the orders of a commander-in-chief, nor the place where the troops are stationed, nor by the number of cannon or of slaughtered men, but by that intangible force called the spirit of the army… ~ Supreme Commander Kutuzov

Never to the end of his life could he understand goodness, beauty, or truth, or the significance of his actions which were too contrary to goodness and truth, too remote from everything human, for him ever to be able to grasp their meaning. He could not disavow his actions, belauded as they were by half the world, and so he had to repudiate truth, goodness and all humanity. ~ Napoleon

Man’s mind cannot grasp the causes of events in their completeness, but the desire to find those causes is implanted in man’s soul.

O Lord, my Creator, Thou has heard our payer…Russia is saved. I think Thee, O Lord! and he wept. ~ Supreme Commander Kutuzov

For us with the standard of good and evil given us by Christ, no human actions are incommensurable. And there is no greatness where simplicity, goodness, and truth are absent.