To be honest, this essay was not inspired in NOVA and not this week. It came last week, when I was in Michigan – at a Detroit Tiger’s baseball game. We won by the way, 7-5.

I rarely watch baseball on TV, unless it’s the Tigers and the playoffs, but being at the park is entirely different. I always get nostalgic at the park. I might try and tell you what “baseball is” but someone’s already done it much better than I could hope to.

Someone – is Ernie Harwell, announcer of the Detroit Tigers 1960-1990 and 1994-2002. Harwell is in the Major League Baseball Hall-of-Fame as an announcer. He also has the distinction of being the only announcer who was traded as part of a player deal. That deal was before Harwell came to Detroit and was orchestrated by Branch Rickey of the Brooklyn Dodgers. You might have heard of Rickey; he was famous for doing things in baseball that had never been done before.

I’m nostalgic enough about baseball, without added inspiration, but when I approached Comerica Park, home of the Tigers, there was Ernie Harwell, standing in a place of honor at the main entrance. 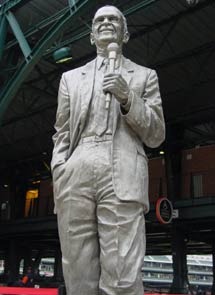 Some of my earliest and fondest memories of baseball were in the Summer of 68 – the glorious Summer of 68. 1968 was the last year of the true pennant race – no league playoffs – the team with the best record in the American League faced the best team in the National League in the World Series. The Tigers were chased by the Birds (Baltimore Orioles) in 68, but we pulled away in the end and then faced the other birds, (St. Louis Cardinals – or Cards) in the World Series. And while Denny McLain was the hero of the regular season, winning 31, the last pitcher to reach that mark, Mickey Lolich was the hero of the series winning three, including decisive game seven that brought the title to MoTown.

I can still hear the voice of Ernie Harwell from that summer, and into the fall classic. I usually spent summer evenings fishing, but not that summer. That summer I sat by my Dad, and my friends, and my friend’s dads, and a transistor radio listening to the sonorous voice of Ernie Harwell:
~ Kaline drives it deep to left – that one is looooong gone
~ hit sharply up the middle, McAuliffe makes the grab throws to Cash and the Tigers get two for the price of one
~ Lolich takes the sign from Freehan, here’s the pitch for a strike – and he stood there like a house by the side of the road
~ it’s the payoff and Northrup hits a line drive hard up the middle, it’s to the wall and that will score two
~ He hits that one deep to center – Stanley’s under it – and that’s the ball game, Tigers take three from the Birds

But I digress. I mentioned that I was going to let Ernie tell you what baseball is. Harwell composed a poem about baseball, but as far as I know he never gave it a title. I’ll just call it Baseball Is…

He recited it with variation on different occasions. This version was delivered during his final season. Click here

I have many indistinct memories of Ernie Harwell. One very vivid memory though was when I heard the news of his passing in 2010...The sound of summer silenced

How can you not be romantic about baseball?