The Merry Wives of Windsor by William Shakespeare

The Merry Wives of Windsor is a comedy by Shakespeare, published in 1602, probably written circa 1597. The setting is early 15th Century England; we know this as the main character Sir John Falstaff also appears in Henry IV. 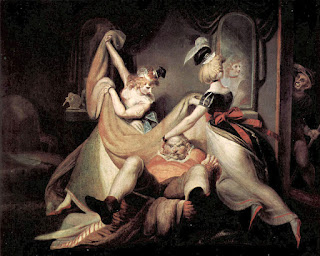 Falstaff in the Wastebasket by Henry Fuseli

Falstaff, the fat knight, finds himself financially embarrassed during a stay in Berkshire. To alleviate his condition, he intends to seduce, not one, but two separate, wealthy married women – Mistress Ford, and Mistress Page. Falstaff is obviously a cad, but he is also none too smart in my opinion. He sends nearly identical love letters to the two women, who are intimate friends. They are individually affronted, and collectively outraged by Falstaff’s brazen impudence. They are clever and witty women though. They feign interest in his advances, which leads to comical circumstances and poetic, humiliating justice for Falstaff. He is once hidden in a basket of smelly linen and dumped into the Thames; he is later disguised as a woman and beaten mercilessly as a witch, and eventually disguised as Herne the Hunter, a ghost of Berkshire forest, only to be pinched, poked, and burned by children imitating woodland fairies.

And even Sir John Falstaff is reconciled to the Windsor community, though justly and severely humbled.

At one point, amongst the comical intrigues, two characters are set to duel: a Parson and a Doctor, but by sending the combatants to different dueling spots, the local innkeeper (Host) spares them both. Later, cooler heads prevail. I liked Host’s explanation of his motive:

Peace I say; hear mine host of the Garter. Am I politic? Am I subtle? Am I a Machiavel? Shall I lose my doctor? No; he gives me the potions and the motions. Shall I lose my parson? My priest? My Sir Hugh? No; he gives me the proverbs and the no-verbs. Give me thy hand, terrestrial; so;  – give me thy hand, celestial, so.  – Boys of art, I have deceived you both; I have directed you to wrong places; your hearts are mighty, your skins are whole, and let burnt sack be the issue. – Come, lay their swords to pawn:  – Follow me, lad of peace; follow, follow, follow.

Phrases from The Merry Wives of Windsor, that are now part of English vernacular:
I hope, upon familiarity will grow more contempt (Familiarity breeds contempt)

Why, then the world’s mine oyster