Vanity Fair: A Novel Without a Hero by William Makepeace Thackeray (81 down 19 to go) 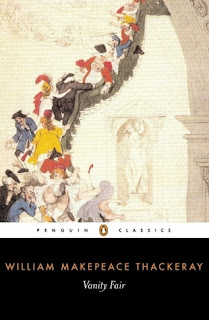 Vanity Fair is a very vain, wicked, foolish place, full of all sorts of humbugs and falseness and pretensions.

This is the second time I’ve read Vanity Fair, the first being about seven years ago. It remains the only work I’ve read by William Makepeace Thackeray. The novel is a Victorian era satire of early 19th Century British society. The novel takes its title from Pilgrim’s Progress by John Bunyan. In Bunyan’s allegory, Vanity Fair is a never-ending fair in the village of Vanity, which represents humanity’s vain pursuit of transitory pleasure.

I believe this novel should be described as a Picaresque Novel - though I have never seen it described by that term.

This novel satisfies 2017 Back to the Classics Challenge, Category #6: A Romance Classic.

Vanity Fair is subtitled A Novel Without a Hero – an assertion I do not agree with, though I understand the implication.

The principal characters are Amelia Sedley (Emmy) and Rebecca Sharp (Becky). The story opens as the girls graduate from school together, expecting to lead very different and separate lives. Emmy comes from a distinguished London family and Becky is the orphaned daughter of an artist and a dancer – worse – she is French. Everyone adores sweet and guileless Emmy, while most people, most females that is, mistrust and dislike the artful Becky. The girls are friends though, because Emmy loves most everyone and is rather naïve about their motives, and Becky knows that Emmy might be of some benefit to her one day. The rest of the novel tells the tale of their very different but interconnected lives.

I’ve already mentioned this is a satire. With that, the title, and subtitle, you should be able to infer this is Thackeray’s indictment of the vain and pretentious lives we so often lead. I don’t usually like novels without heroes – well I’ve already disclosed that I don’t agree with that assertion – but even if it were true, I’d still love this tale. All of Thackeray’s characters are flawed, and therefore completely human and believable. I was confused at times, feeling empathy for characters I felt I was supposed to dislike, and feeling disdain for those I felt I was supposed to admire. That’s a bit of masterful writing in my opinion, and quite riveting. Let me introduce you to a few of the principals:

Becky Sharp – Slighted by life, and most of society. She is ambitious, intelligent, cunning, accomplished, and beautiful. She employs her charms to manipulate anyone who can benefit her, especially men. And yet, in spite of her artfulness, I could not quite dislike her. Becky perhaps, describes her own self best:

“I am alone in the world,” said the friendless girl. “I have nothing to look for but what my own labour can bring me; and while that little pink-faced chit Amelia with not half my sense, has ten thousand pounds and an establishment secure, poor Rebecca (and my figure is far better than hers) has only herself and her own wits to trust to. Well, let us see if my wits cannot provide me with an honourable maintenance, and if some day or the other I cannot show Miss Amelia my real superiority over her. Not that I dislike poor Amelia: who can dislike such a harmless, good-natured creature? – only it will be a fine day when I can take my place above her in the world, as why, indeed should I not?”

Emmy Sedley – Also beautiful and accomplished, but Becky’s opposite in every other way. She is sweet, kind, innocent, and naïve – and to be honest, though I hate to say it – a bit simple. I couldn’t quite love her as I thought I should. A couple of Thackeray’s descriptions of Amelia:

…if she never said brilliant things, she never spoke or thought unkind ones; guileless and artless, loving and pure…

George Osbourne – a dashing young soldier and Emmy’s intended from childhood. He is wealthy, fickle, extravagant, vain, and selfish. Emmy will ever adore him, and is too simple to see his true character.

The entire Crawley family – headed by Sir Pitt, the Baron into whose household Becky will become governess. Sir Pitt, is an English gentleman, gentleman, please understand, only in the traditional English meaning of landed gentry. He is a gentleman in no other way. He is an odious old boor and miser. The rest of the Crawley family is only slightly better. Becky becomes a member of this “noble” family. She – and they – deserve each other.

He had very long legs, a yellow face, and a slight lisp, which at first was rather ridiculous. But his thoughts were just, his brains were fairly good, his life was honest and pure, and his heart warm and humble.

Dobbin is the steadfast hero of the tale.

Let me circle back to Becky. Some feel she is the hero, or at least the antihero. I will call her neither, though she is indeed interesting. She is a bit like Scarlett O’Hara – beautiful, charming, intrepid, manipulative, and dangerous. There is only one person whom ever really truly earns Becky’s affection – the one person who ever truly showed any to Becky. In the end, Becky redeems herself in one altruistic moment, to secure the happiness of this one friend.

In short, I loved it. As I said, it’s a reread and I knew I would love it, but it was better this second time around.

Have you read Vanity Fair? What did you think?

(There are numerous film renditions…any recommendations?)

A few other observations. Thackeray seems to have put bits and pieces of himself into many different characters – unflattering things. I admire a man that can see his own faults. Thackeray was apparently a fan of The Tempest, as he makes several allusions to characters from Shakespeare's play.

…we may be certain that persons whom all the world treats ill, deserve entirely the treatment they get. The world is a looking glass, and gives back to every man the reflection of his own face. Frown at it, and it will in turn look sourly upon you; laugh at it and with it, and it is a jolly kind companion.

But my kind reader will please to remember that this history has “Vanity Fair” for a title, and that Vanity Fair is a very vain, wicked, foolish place, full of all sorts of humbugs and falseness and pretensions.

And, as we bring our characters forward, I will ask leave, as a man and a brother, not only to introduce them but occasionally to step down from the platform, and talk about them: if they are good and kindly, to love them and shake them by the hand: if they are silly to laugh at them confidentially in the reader’s sleeve: if they are wicked and heartless, to abuse them in the strongest terms which politeness admits of.

If people only made prudent marriages, what a stop to population there would be!

Centuries hence, we Frenchmen and Englishmen might be boasting and killing each other still, carrying out bravely the Devil’s code of honor.

…in Vanity Fair the sins of very great personages are looked at indulgently.

Film Renditions: 2004 starring Reese Witherspoon is pretty good, pretty faithful except that they try to wrap the story up far too quickly. The last 5 or 6 chapters are portrayed in about 10 minutes. Skip the movie, read the book.