Don't Back Up...Don't Ever Back Up - NOVA this week

But first – something more important than my tongue in cheek essay. My subject line is a paraphrase from a speech by basketball coach Jim Valvano. It was his acceptance speech for the inaugural edition of the ESPY Awards, Arthur Ashe Courage Award. Coach V was dying when he gave this speech, in fact he would die less than two months later. It is one of the best speeches I’ve ever heard.

It also happens to be V Week right now for the V Foundation – a non-profit raising money for cancer research.

Watch the speech HERE; You’ll be glad you did. Learn about contributing to the V Foundation HERE.

But all of that, albeit far more important, has nothing to do with this life-changing post. I just borrowed a line from Coach V’s speech – Don’t give up, don’t ever give up!

And altered it a bit to – Don’t back up, don’t ever back up.

More precisely, don’t back into a parking space. I’ll tell you why.

Perpendicular parking: When the parking spaces are configured like this:

It does not make sense to back into these parking spaces, yet I notice many people do. I presume their thinking goes something like this – Hey, if I back in now, I can just zip right out later. It seems to makes sense – but it doesn’t; it still involves backing up, one way or the other, and the truth is, it is MUCH easier to back OUT from between two cars, than it is to back IN.

There is one circumstance when it makes sense to back in. If you are going to rob the joint, then you may back in to facilitate a speedy get away. But really? Think about a get-away driver.

Other than the robbery scenario it just doesn’t make sense to back in, so – don’t back up, don’t ever back up.

This doesn’t mean you shouldn’t pull through if the opposite spot is open. This makes perfect sense as it eliminates backing up altogether. Go for it.

And really, if you want to back in – feel free. It’s not logical; it doesn’t make sense, but whatevs.

Diagonal parking however, there is a definite RIGHT and WRONG in this scenario: 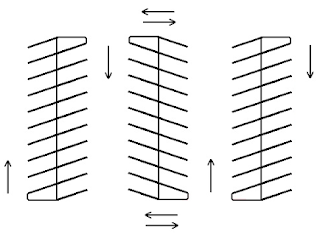 This configuration is intended to be one-way traffic, and absolutely NOT to be backed into. You pull in frontwards – easy, and back out – easy. And if the opposite spot is open DO NOT pull through, because when you pull out, you will be going the wrong way down a one-way row. Don’t do it.

Parallel parking: The one scenario when you should back in. When parallel parking BETWEEN two cars, you should pull past the spot, and back in. It absolutely does not work if you try to go in frontwards. It has to do with wheels turning at the front of the car, and physics, and geometry. Backing in is correct, pulling in frontwards is incorrect and won’t turn out well. Of course, if there are several spaces open, you can pull in frontwards and move up to the foremost spot. Go for it.

NOVA this week is just a writing exercise. You are, of course, free to ignore my indisputable logic.

But if it’s raining or snowing – PLEASE drive with your headlights on. It helps you BE SEEN, even if it doesn’t help you see.