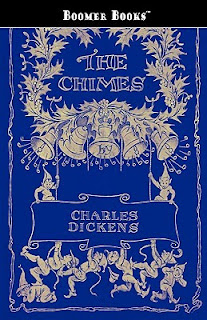 The Chimes by Charles Dickens

The Chimes, is seldom referred to with its subtitle: The Chimes: A Goblin Story of Some Bells that Rang an Old Year Out and a New Year In. It was published in 1844, a year after A Christmas Carol, and a year before The Cricket on the Hearth.

I loved it. It is a bit reminiscent of A Christmas Carol as it involves some specters who nudge a poor lost soul onto the path of joy. However, in this case the soul is a kind and loveable chap, vs a Scrooge. The Chap is Toby (Trotty) Veck, nicknamed Trotty as he is a porter for hire, and often seen trotting here and there on his errands. Work is scarce though and Toby is down on his luck.

Toby waits for work adjacent to the church where when the chimes ring. He hears messages in their music – usually of hope for better days. Hence, Toby is a poor, but generally cheerful chap – until some wealthy and ungracious employers cause him to doubt his very right to exist – him being such a burden on society.

But then the chimes sing a new song to Toby one haunted night – most likely just a dream – they bring him neither riches or comfort, just his hopeful disposition.

I read The Chimes for Dickens in December (hosted by Fanda Classiclit) and A Literary Christmas (hosted by In The Bookcase). 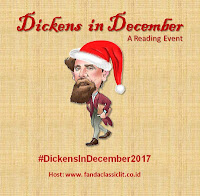 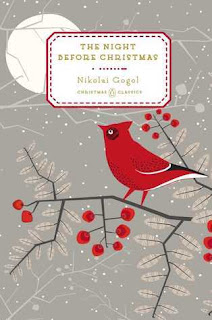 For A Literary Christmas, I also read The Night Before Christmas by Nikolai Gogol. This is the first time I’ve read Gogol – and now I know I must read more. What a hoot! It is about a pious young blacksmith, Vakula who is love with the village beauty Oksana.

But Vakula is not very popular with a neighborhood devil – like ya know, a devil, horns and tail, all that – because Vakula, who is also a talented artist, made a painting for the church that was not at all flattering to the devil.

So, the devil decides to steal the moon, in attempt to foil Vakula’s dreams. It’s a bit complicated how that was supposed to work. I recommend you read the tale. The dark of the moonless night unleashes a series mishaps that finds, the devil, Oksana’s father (who didn’t approve of Vakula), the village deacon, and a village official all tied in coal sacks. Each one in succession, devil included, was paying a not very honorable visit to Vakula’s mother – who was also, unknown to anyone a witch – a real no-kidding witch which flies about on a broomstick. They each had to hide, when the next one came to call.

It’s a farcical comedy of errors.

Do you know the Christmas Song, The Most Wonderful Time of the Year? I remember it sung by Andy Williams, but I’m sure there have been others. There is a line that goes…there’ll be scary ghost stories of Christmases long long ago.

I used to think that line a bit absurd – There was after all, only ONE scary ghost story about Christmas. I was wrong. There are actually quite a few. So far, most are pretty fun, but I think, in the right setting, they could be a bit scary. 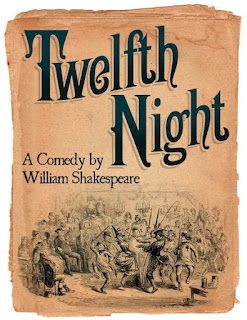 For A Literary Christmas, I also read Twelfth Night; or What You Will by William Shakespeare. It is a comedy written and performed around 1601-02. The setting is early 17th Century Illyeria (Western Balkans).

I am including this play in the Literary Christmas Challenge, because even though it is not a Christmas story, Shakespeare wrote it as a Twelfth Night celebration to close the Christmas season – hence the title.

It is indeed a comedy. I have not read many of Shakespeare’s comedies yet, but this was by far the most comical I have read. As with any play, something is lost in reading. I’d love to see it in its proper form – a stage play. My full review of Twelfth Night.

Have yourself a Merry Little Christmas!