Much Ado About Nothing by William Shakespeare

Much Ado About Nothing by William Shakespeare

Much Ado About Nothing is a comedy by William Shakespeare, written late 16th, performed early 17thcentury. The title, probably a double entendre, as it could just as easily be Much Ado About Noting (noting being - gossip, rumor, eavesdropping).

It’s a farcical comedy of errors as two returning warriors, fall in love with two of the worthy maidens of Messina – though they realize their love through very different circumstances.

Claudio is immediately struck by the beauty of Hero (Hero is the name of the female character). The two were acquainted already, but her beauty has apparently blossomed, and Claudio sees her with new eyes. His friend, confirmed bachelor Benedick fails to dissuade Claudio, and his own disdain of marriage, too good a trope for the Bard to ignore, enter Beatrice.

The hopes and happiness of each couple is nearly undone by another motif – the masquerade ball – where folks so easily deceived by mask and costume.

Don’t get me wrong; I don’t mean to disparage the Bard’s craft, but I am again persuaded, that his plays are best experienced as intended in theater. This would be a delightful romp on stage, but in reading – it’s just not as fun. I’m certain for instance, an artful comic actor could make a great performance of Dogberry, the honest and dimwitted constable. 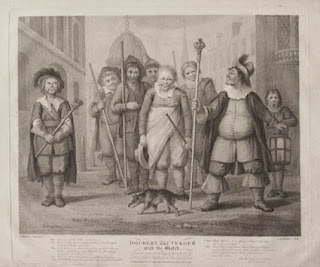 But there’s no Shakespeare in the Park this time of year, so the play’s the thing – in print.

I read this as part of the 2019 Year of Shakespeare challenge.
Posted by Joseph at 6:40 PM