Watership Down by Richard Adams (novel #119) 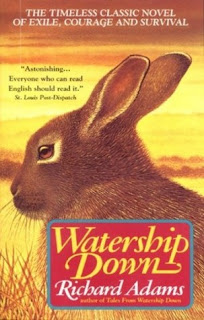 All rabbits love to trespass and steal and when it comes to the point very few will admit they are afraid to do so… ~ Richard Adams, Watership Down

Watership Down is a real place, in Hampshire, England, and rabbits are real creatures, in all the wide world.

Wikipedia states that Watership Down was written in English and Lapine (bravo!), as the anthropomorphized rabbits in this tale have distinctly lapine (rabbit) words, unknown and un-useful to men, such as silfay – to go above ground to feed, or tharn – to be frozen with fear. Other words are onomatopoeia, such as hrududu – tractor or any motorized vehicle.

And although the rabbits think and talk, they are otherwise natural rabbits and believable creatures of the wild. Adams went to some length researching the lives of rabbits, for the very purpose of keeping them plausible.

Adams would often make up stories for his daughters during long road trips. When he began the story of rabbits Hazel and Fiver, his daughters urged him to write it down, but he demurred until one night reading them some awful bit of fiction, he threw the book down and proclaimed “I could write better than that myself.”

And it would seem – he was correct. (though he was delicate enough not to name the book he was reading)

Watership Down is a fantasy, and like many fantasies, it can seem an apparent allegory, but Adams was quite clear.

I want to emphasize that Watership Down was never intended to be some sort of allegory or parable. It is simply the story about rabbits made up and told in the car.

I for one, am glad for that. It is delightful as it is – simply a story.

It is the story of a group of rabbits, who must leave a comfortable home, make an arduous journey, and create a new life.

To say they must leave, is an exaggeration, and also the truth. One of the rabbits, Fiver, has a sort of sixth sense. He senses, that danger – that death is coming to the Sandeford warren. Fiver is a bit smallish, and not much respected, except by his brother Hazel, who although young, is of good size and likely to be a leader in the warren one day. Hazel has learned to trust Fiver’s instincts and is able to persuade a small band of bucks to leave the warren for destination unknown.

And although I accept the author’s assertion that it is simply a story – stories have lessons and meaning. For me, Watership Down is a story of leadership. Among the motley crew of rabbits, there are distinct personalities, with diverse strengths. Fiver has sixth sense, Bigwig is strong and brave, Blackberry is clever, Dandelion is swift and a good storyteller (an important trait), Pipkin is small and fiercely loyal, and Hazel is best at nothing accept recognizing the strengths in others, and capitalizing on their strengths; he is the leader.

And a great leader. Bigwig, Fiver, the others, and Hazel himself must learn this ere the end.

Adams does a magnificent job of anthropomorphizing the rabbits – but leaving them still as rabbits. The omniscient narrator describes their thoughts and feelings, which although relatable, are also simple rabbit thoughts. When Blackberry devises a plan to help Fiver and Pipkin cross a river by floating on a piece of board, most of the rabbits cannot quite comprehend what happened – something nearly like magic.

Adams has a pleasing way with words, and a keen understanding of humanity – and perhaps all sentient beings. He writes:

When several creatures – men or animals – have worked together to overcome something offering resistance and have at last succeeded, there follows often a pause – as though they felt the propriety of paying respect to the adversary who has put up a good fight. The great tree falls, splitting, cracking, rushing down in leaves to the final, shuddering blow along the ground. Then the foresters are silent, and do not at once sit down. After hours, deep snowdrift has been cleared and the lorry is ready to take the men home out of the cold. But they stand a while, leaning on their spades and only nodding unsmilingly as the car-drivers go through, waving their thanks.

The rabbits’ journey is fraught with peril and uncertainty, and even if they find a new home, you might have noticed they have no does (females). It is more violent that you might expect for a tale about bunnies – not quite a children’s story. It is told with passion, hope, and humor. I found Watership Down poignant and entertaining and I highly recommend it. Have you read it? What did you think?