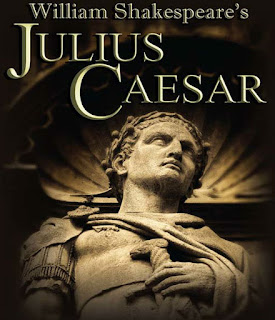 He is a dreamer; let us leave him ~ Julius Caesar regarding the Soothsayer who told him Beware the ides of March

The fault, dear Brutus, is not in our stars,
But in ourselves that we are underlings ~ Cassius, one of Caesar’s betrayers

Julius Caesar is a tragedy by Shakespeare, though it is also historical. It was written very late 16thCentury and, in spite of the name, is really more about Marcus Brutus and the dilemma he faces regarding his friend Julius Caesar.

The setting:  Rome, 44 BC, during the Roman Republic, not the Roman Empire. Julius Caesar was not emperor, there was no Roman emperor; he was the greatest military leader of his day, who was becoming increasingly powerful and popular. A group of Senators and Generals fear Caesar will soon be made King, and so, ostensibly for the love of Rome, they plot Caesars death. They need Brutus to join the conspiracy if they hope to keep the peace in the aftermath.

But you probably know the outcome. Ironically, the attempt to preserve the republic, causes its demise and ushers in the Roman Empire (or dictatorship), when Caesar’s adopted son Octavius becomes the first Roman Emperor, Caesar Augustus.

This may be my favorite of Shakespeare’s plays. It is an intriguing mess of conflicted ideals: friendship vs patriotism, law vs justice, idealism vs pragmatism, and honor vs necessity. It is filled with powerful quotations, many of which are part of today’s vernacular.

And a couple great speeches. First, Brutus who convinces the pro-Caesar mob that the assassination was necessary for the good of greater Rome.

If, then that friend demand why Brutus rose against Caesar, this is my answer, - Not that I loved Caesar less, but that I loved Rome more.

He is followed immediately by Marc Antony’s eulogy of Caesar. Antony was not one of the conspirators, but he is allowed to speak kindly of Caesar, in hopes of bringing about some healing and unity to the nation.

But Antony, has a different agenda, and with crafty words, words that ostensibly place no shame on the conspirators, he subtly lays bare the treachery and ambition of the assassins, and turns the crowd against them. Antony’s speech, begins with some of Shakespeare’s most famous lines:

Now let it work: mischief, thou art afoot.Take thou what course thou wilt!

I ached for Caesar at his betrayal. When he cries:

I was dubious of his betrayers – I think most acted from jealousy and ambition rather than altruism. I sympathized with Brutus, in a disappointed sort of way, and I admired Marc Antony, in a devious sort of way. Most of all, I despaired for Rome.

In the end, there is much death, much falling on swords, much suffering before the rise of an Empire.

I’d love to see this enacted on stage. In the meantime, any recommendations for a good film rendering?

I read this for the 2019 Year of Shakespeare Challenge, and although I didn’t read it as part of R.I.P. 14, I could have – because it has a ghost, ya gotta love a play with a ghost.

It was Greek to me ~ Casca, on not being able to understand Cicero who was speaking Greek

For let the gods so speed me as I love
The name of honour more than I fear death. ~ Brutus

Good night then Casca: this disturbed sky is not to walk in. ~ Cicero

Let’s be sacrificers, but not butchers… ~ Brutus

No, Cassius, no: think not, thou noble Roman 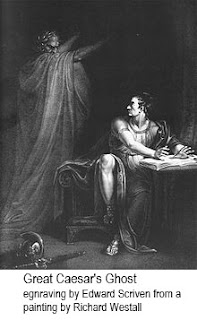 That ever Brutus will go bound to Rome;
He bears too great a mind. But this same day
Must end that work the ides of March began;
And whether we shall meet again, I know not.
Therefore our everlasting farewell take:
For ever, and for ever, farewell Cassius!
If we do meet again, why, we shall smile;
If not, why then, this parting was well made. ~ Brutus

O, coward that I am, to live so long,
To see my best friend ta’en before my face. ~ Cassius on seeing Titinius captured

Like most of Shakespeare’s plays, Julius Caesar is filled with phrases that have made their way into the modern vernacular – many of which I’ve already cited: The Dogs of War, It’s Greek to me, Cowards die a thousand deaths, etc. There is probably one more modern colloquialism that should be attributed to this play…