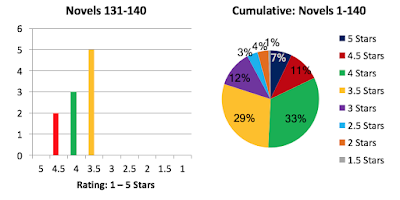 Least Favorite: The Day of the Triffids

Best Alternate Title: The Bee Hunter – which I think is a better, though less commonly used, title for The Oak Openings

Most Villainous: Count Dracula
Dishonorable Mention: Other Mother from Coraline

Most interesting/Complex character: Onoah, Native American from The Oak Openings

Best Quotation: Listen to them – the children of the night. What music they make! ~ Count Dracula referring to the howling of wolves
Runner Up: “You know,” he added very gravely, “it’s one of the most serious things that can possibly happen to one in a battle – to get one’s head cut off”. ~ Tweedle Dee

Best film adaptation: Coraline
There are pretty good film versions of all of these, except The Oak Openings and The Universal Baseball Association, which I don’t believe have been adapted to film. I believe I read somewhere that A Christmas Carol has been adapted to film more than any other work of literature.