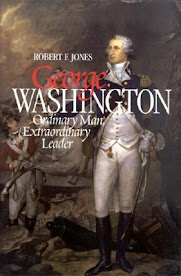 Our case is not desperate, if virtue exists in the people and there is wisdom among our rulers. ~ General George Washington

As presidential biographies go, this is short and quite accessible. It contains very little about George Washington’s childhood – because according to the author: there is little evidence to go on.

Washington’s father died when George was barely one and there is little written about his education. There were however two formative influences in his early life: the study of deportment, as expounded in Rules of Civility and Decent Behavior, and Stoic philosophy, primarily introduced to him by family friend, Colonel William Fairfax. If you understand even a little about these two influences, the rest of Washington’s life makes perfect sense.

Although one thing surprised me based on previous perceptions I had of George Washington; he was not a deeply religious man; he is best described as a Deist. He seldom spoke of God in personal terms, preferring impersonal terms such as "Divine Providence".

The rest of this glimpse at the “Father of the Nation” was largely what I expected.

George Washington was a quiet and dignified man, slow to decide but resolute once decided. He was concerned with his reputation and legacy, but ready to risk all for what he believed was right. As the author put it…

He had the qualities needed to secure victory: patience, self-discipline, organizing ability, willingness to work hard, and faith in the eventual success of the struggle for independence.

He was a professional surveyor, planter, and land speculator. But of course, he is best known as soldier and statesman. As a soldier, he was competent, but not brilliant as either strategist or tactician. Similarly, as statesman, he was not a great orator, writer, or politician – but in both roles, he was as the title expresses an extraordinary leader.

…he was helping the new nation through a difficult adolescence.

Abigail Adams, wife of then Vice President John Adams had this to say of President Washington…

He is polite with dignity, affable without familiarity, distant without haughtiness, grave without austerity, modest, wise, and good.

There is a Magic in his name more powerful than the abilities of any other man can ever acquire.

George Washington was also a slave owner. It seems disingenuous to extol his virtues and ignore his greatest sin, as indeed it was – an awful, abhorrent sin. However, it has taken humanity over 6,000 years to collectively repudiate the evils of slavery. I don’t expect a man who was born to an age when it was a sanctioned institution to perfectly sort it out, on his own, in less than 50 years of adult life. I am not an apologist for the slave owner, but I don’t believe George Washington’s singular failure negates the value of a life that is otherwise characterized by virtue and integrity.

So, for something less depressing, two slightly amusing anecdotes.

During his presidency, Washington was addressed as “Excellency”. It was not until Jefferson’s presidency that “Mr. President” became the accepted term of address.

When the British surrendered at Yorktown, custom called for the commanding general to surrender his sword, but General Cornwallis pleaded illness and sent Brigadier O’Hara. In response to this slight, General Washington deputed Major General Benjamin Lincoln to accept the surrender – which must have been satisfying to Lincoln, who previously had surrendered to Cornwallis at the Battle of Charlestown.

This book satisfies square B4, memoir or biography, in the 2020 Classic Bingo Challenge

Email ThisBlogThis!Share to TwitterShare to FacebookShare to Pinterest
Labels: biography