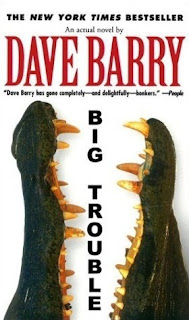 Detective Baker decided that this was probably going to be one of those cases where somebody shoots a gun and nobody ever finds out who or why, which is a fairly common type of case in Miami.

I usually read the classics, and even though there is no precise qualification for that distinction, I think it is safe to say Big Trouble does not qualify – and likely never will.

Which is not to say it is not a delightful read.

In preparing this review, I realized one of the advantages of reading (and reviewing) dead authors – I never have to worry about them reading my review. I was literally worrying about that the first dozen or so pages of Big Trouble, because to be honest, I wasn’t loving it. I wanted to because I love Dave Barry, who is a Pulitzer prize-winning, humor columnist. He is cheerfully cynical, patently absurd, and endearingly self-effacing. I did not read his column regularly, but whenever I did, I thoroughly enjoyed it.

But Big Trouble was just a little too cliché – at first – in the character of Puggy: loveable loser, simpleton, loafer, boozer, semiprofessional vagrant.

But somewhere the story turned, just about the same time Puggy’s day turned. He was having a good day, making $45 easy, by voting at several different polling stations, but later gets beat up, but then gets an easy job and free beer.

He was drinking his second free beer, feeling better again about how the day was going, except for peeing his pants, when the door opened.

People peeing their pants is a motif Barry uses repeatedly, but in a very tasteful way.

Besides Puggy, there are a pair of likeable hit men (I know, but yeah), maybe due to their utterly detestable target, international arms dealers (also nearly likeable), small time thugs, a couple good cops, a good but incompetently overzealous cop, awkward high school kids, their surprisingly intelligent parents, a dog, a poisonous toad, a python, and no gators (except those associated with the University of Florida).