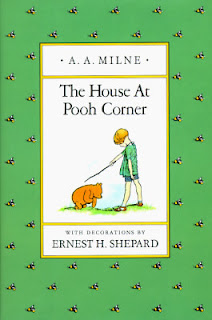 …wherever they go, and whatever happens to them on the way, in that enchanted place on the top of the Forest, a little boy and his Bear will always be playing.

The House at Pooh Corner is a second volume of stories about Winnie the Pooh and friends IN WHICH Christopher Robin grows up.

The House at Pooh Corner is more of the same – that’s a good thing:  just as sweet, just as charming, all the same characters, plus Tigger. Illustrations again by Shepard, just as delightful, this time in color.

I failed to mention in my review of Winnie the Pooh, that Pooh is a rather prolific poet. I’m not sure there was a chapter in either volume when he does not come up with a poem, song, or “hum” as he sometimes calls them. For a bear of very little brain, he is quite philosophic about his art

“But it isn’t Easy,” said Pooh to himself, as he looked at what had once been Owl’s house. “Because Poetry and Hums aren’t things which you get, they’re things which get you. And all you can do is to go where they can find you.

A bit later, Eeyore challenges Pooh’s status as Poet Laureate of the 100 Acre Wood, with a poem of his own he calls POEM. I won’t bother you with the poem, as it isn’t very good, in spite of Pooh’s comment.

“It’s much better than mine,” said Pooh admiringly, and he really thought it was.

“Well,” explained Eeyore modestly, “it was meant to be.”

I alluded to the notion that Christopher Robin grows up in this volume. It’s a very vagueish sort of thing, a rather him and hawish thing, a slightly not quite clearish thing, implied in the final chapter: “IN WHICH Christopher Robin and Pooh Come to an Enchanted Place, and We Leave Them There”. It would leave the reader rather sad except that…

So they went off together. But wherever they go, and whatever happens to them on the way, in that enchanted place on the top of the Forest, a little boy and his Bear will always be playing. 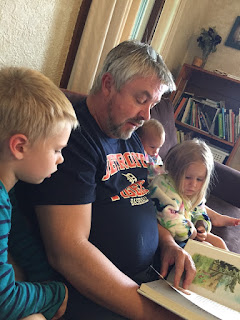 These are three of my Grandchildren, as I'm reading to them from The Winnie the Pooh Collection.

Halfway between Pooh’s house and Piglet’s house was a thoughtful spot where they met sometimes when they had decided to go and see each other, and as it was warm and out of the wind they would sit down there for a little and wonder what they would do now that they had seen each other.

“Supposing a tree fell down, Pooh, when we were underneath it?”

Piglet was comforted by this…