Green Eggs and Ham by Dr. Seuss - guest review by my Grandson 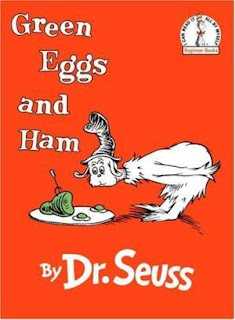 Titus felt that Sam is a guide for the antagonist everyman, akin to Virgil and Dante, albeit on a far less epic stage. Titus enjoyed Green Eggs and Ham – the storybook, not the dish. He felt that the story should be analyzed on at least three different levels: literal, whimsical, and allegorical. He offers unreserved endorsement only for the whimsical. 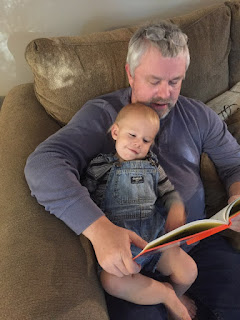 Titus concedes that the suggestion of consuming green eggs or green ham, is clearly not intended literally. However, he still worries that innocent children might be tempted to dine on green eggs or green ham to their detriment. The author is a doctor after all, and should know these things. Titus understands that Doctor Seuss chose a dish intended to evoke aversion, but felt it could have been safely concluded with an icky, but non-bacterial infected dish such as liver and onions or Brussel sprouts. He further recognizes this could have caused problems with rhyme and meter, but he believes the good Doctor could have risen to the challenge.

I will not eat liver and onions,

I’d rather my feet were covered in bunions.

I will not taste a Brussel sprout

So leave now Sam, get out, Get OUT!

Titus enjoyed the whimsical farce without reservation. The poetry was hauntingly beautiful, the imagery stunning, and the outcome triumphant.

And finally, the allegory: wherein Titus feels he must temper his approbation just a bit. He believes the premise: that we should be willing to try new things, that we should not be inhibited by convention – is a laudable sentiment, WITHIN LIMITS. Like so many platitudes espoused today, the notion is worthy, but it can easily be taken to reckless extremes. Indeed, the allegory seems to argue against itself – as consuming green eggs or green ham could easily cause gastrointestinal discomfort or worse. Titus was particularly disquieted when the antagonist “gives in” to peer pressure and partakes of something his conscience was warning against.

Which is not to say, the allegory is without merit. Titus feels it should be taken as it is: an allegory, suitable in principle, but not an immutable truth, not an absolute edict, and not suitable to every circumstance.

Or even better, read it as just a silly, fun story, with delightful pictures and pleasing rhymes.