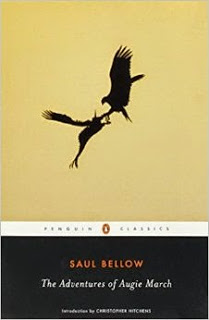 Lord, what a runner after good things, servant of love, embarker on schemes, recruit of sublime ideas, and good time Charlie. ~ Augie March’s surmise of himself

This is the first time I’ve read The Adventures of Augie March or Saul Bellow. The novel is a picaresque tale and first-person narrative. It is the coming of age tale of Chicago born Augie March, beginning in his childhood, during the great depression. It is told in realist style, with definite existential themes.

According to an unnamed editor, Augie is

I am an American, Chicago born, and go at things as I have taught myself, free-style, and will make the record in my own way: first to knock, first admitted.

As already alluded to, it is a picaresque novel. That was a new one on me: the adventures of a roguish hero of low social class who lives by his wits in a corrupt society. That’s about right. There isn’t much of a plot for me to explain. It begins in Augie’s childhood home with his older brother Simon, another brother George who is mentally disabled, his mother who is going blind, and a live in domineering tenant they call Grandma. Grandma is not really any relation. She does truly seem to care about the March’s though and since Mother March is indecisive and rather simple, Grandma runs things. Augie’s father left before Augie can remember.

Augie never quite seems to find his place in the world, or even know what it is. I’ll relate one phase of Augie’s life that was amusing. He meets a strong-willed heiress, Thea, who professes to love him. At first Augie’s loves Thea's sister, but when his love is not returned, he falls for Thea. Augie falls in love pretty easy. Thea has an absurd idea of buying an eagle, moving to Mexico, training the eagle to catch giant iguanas, selling the iguanas to zoos, and sell the story of the exploit to magazines. Augie blindly goes along, though he has a foreboding sense it will all fail. He names the eagle Caligula, because it sounds like the word Spanish word for eagle: águila. The fiasco does indeed fail, and nearly kills Augie.

In another adventure, Augie is shipwrecked and adrift in a lifeboat with a man who is seriously deluded if not insane.  The novel ends, without really ending. Augie seems to have settled into the closest thing he has known to normalcy, but he is still searching. The reader is hoping for his happiness, but not at all sure Augie has found it. Some observations Augie makes about himself along the way:

I know I longed very much, but I didn’t understand for what.

I watched him study the skill of how to put on a hat, smoke a cigarette, fold a pair of gloves and put them in an inner pocket, and I admired and wondered where it came from, and learned some of it myself. But I never got the sense of luxury he had in doing it.

…something about me suggested adoption.

I was a sucker for it too, family love.

To one of his loves:

But one of the things I thought is that you and I are the kind of people other people are always trying to fit into their schemes.

Before long the word got around that I was a listener to hard-luck stories, personal histories, gripes, and that I gave advice, and by and by I had a daily clientele, almost like a fortuneteller.

I am a person of hope, and now hopes have settled themselves upon children and a settled life.

I liked Augie though he had his flaws. I often wanted to get in his face and shake some sense into him, but it wouldn’t have done any good. He had several friends, relatives, and loves that tried. He reminded me a little of Holden Caulfield from The Catcher in the Rye, but not nearly so annoying.

I learned that a jitney is a nickel from this book.

References to other classic books:

Augie finds some books that interest him: City of the Sun, Utopia, Discourses and The Prince

Augie refers to Sherlock Holmes, and The House of Usher

God may save all, but human rescue is only for a few.

He was an Italian, he brought the style of ancient kingdoms with him.

But while no other animal is reprimanded for its noise, for yelling, roaring, screaming, cawing, or braying, there is supposed to be more delicate relief for the human species.