The Collector by John Fowles (novel #188) 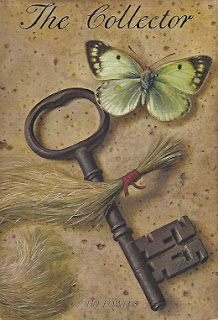 Having her was enough. Nothing needed doing. I just wanted to have her…

The Collector is the debut novel of John Fowles, who is probably best known for The French Lieutenant’s Woman. The Collector is often categorized as a thriller or psychological horror, which was why I picked it for reading in October, but I don’t consider it to be either.

It is the story of a disturbed and lonely young man, obsessed with a beautiful young woman. Frederick is socially awkward, lives with his aunt and cousin, and would probably just have worshipped Miranda from afar, until he wins a small fortune in “the pools”.

They say that power corrupts… and that money is power… so now that he has money – power – Fredericks launches a plan to kidnap Miranda.

And unfortunately, he succeeds, quite affectively.

The novel is told in two alternating parts: Frederick’s perspective and Miranda’s in epistolary form.

What she never understood was that with me it was having. Having her was enough. Nothing needed doing. I just wanted to have her, and safe at last.

And he stands. He’s the most tremendous stander-around I’ve ever met.

He’s a collector. That’s the great dead thing in him.

All those days I knew I would never love another the same. There was only Miranda for ever.

It was captivating - pardon the pun. Not knowing the end, I kept reading, hoping for something hopeful or heroic. Frederick never “abuses” Miranda – other than the whole denying her freedom thing – and as she gets to know him, Miranda feels sympathy, and determines to seek help and clemency for him once she is free. But in the end, the reader has nothing but a sickening fear.

Had I known a bit more about this novel in advance, I wouldn’t have read it. Fowles is a talented writer, so talented that at times I felt empathy for the villain, as does Miranda. That’s not all bad; I believe every villain has a human story. Clinical study of their pathology may be useful for preventive and corrective measures, but as a form of entertainment I don’t think there’s much benefit.

But for the author’s narrative and believable portrayal of two opposite and complex perspectives, I give The Collector

I read this for R.I.P. XVI, as some have categorized it as horror or thriller. I wouldn’t necessarily call it either, but I didn’t know that before reading it, so it stands as one of my books for this challenge.

There are numerous literary references throughout The Collector. The main being, that Miranda nicknames her captor Caliban – from Shakespeare’s The Tempest, where the monster Caliban is obsessed with beautiful Miranda. She also compares the two of them to Dante and Beatrice.

Miranda tries to “teach” Frederick about art and literature and gets him to read The Catcher in the Rye – he doesn’t like it or get it. She reads several other classic novels during her captivity.

"Collector" is a double entendre, as Frederick is a butterfly collector…that is before he collects Miranda.