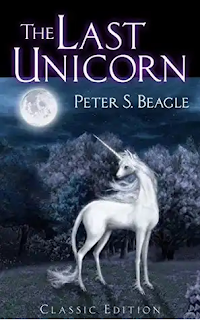 Appearing neither interested nor indifferent, but quiet in the way that a battlefield is sometimes quiet, she watched… [the Unicorn]

It’s a rare man who is taken for what he truly is. ~ Schmendrick the Magician

The Last Unicorn is a fantasy about exactly what the title states – though there is some question as to whether she is truly the last. The Unicorn overhears a hunter tell his companion that they are surely in a unicorn’s wood, as it has signs of enchantment. The hunter also expresses his belief, that if there is a unicorn in the woods, it is very likely the last of its kind.

Unicorns are ordinarily solitary and immortal. The Unicorn fears the others may be lost, captive, or in danger, so she leaves her beloved wood to discover the truth and save them if she can.

The Unicorn is aided along the way by Schmendrick an inept Magician, Molly Grue a gruff but kind woman, and eventually by the idler Prince Lir, who may hide a hero’s heart.

Beagle’s narrative has a lithe and whimsical tone that makes it a pleasure to read.

Beyond the town, darker than dark, King Haggard’s castle teetered like a lunatic on stilts, and beyond the castle the sea slid.

“Heroes,” Prince Lir replied sadly. “Heroes know about order, about happy endings – heroes know that some things are better than others.”

The reader grows to love the Unicorn and her friends, and dread the villain King Haggard and his evil hench-being, the Red Bull.

I liked The Last Unicorn very much, but it may have suffered from high expectations. There were two influences that contributed to my expectations: a charming introduction by Patrick Rothfuss and the song, The Last Unicorn performed by one of my favorite bands America. In spite of my unreasonable hopes, it is still a lovely little tale, with an unexpected and powerful ending that elevated it in the end.

This novel satisfies the category of a title containing a "Mythical Being" in the What’s in a Name? 2022 challenge.

By the way, did you know that unicorns do not look simply like a horse with a horn?

She did not look anything like a horned horse, as unicorns are often pictured, being smaller and cloven-hoofed, and possessing that oldest, wildest grace that horses have never had, that deer have only in a shy, thin imitation and goats in dancing mockery. Her neck was long and slender, making her head seem smaller than it was, and the mane that fell almost to the middle of her back was as soft as dandelion fluff and as fine as cirrus. She had pointed ears and thin legs, with feathers of white hair at the ankles; and the long horn above her eyes shone and shivered with its own seashell light even in the deepest midnight.

The 1982 animated film is a very good rendition. Beagle wrote the screenplay so it is quite faithful to the book. The animation is superb (very 1982) and the cast of voice actors is star-studded: Jeff Bridges, Angela Lansbury, Alan Arkin, Christopher Lee, Keenan Wynn, et al, and Mia Farrow as the Unicorn.