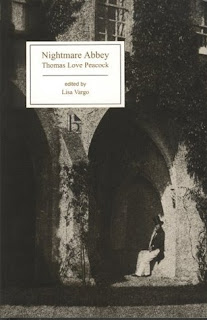 ...Mr. Glowry always chose [his domestics] by one of two criterions, - a long face, or a dismal name.


Nightmare Abbey is an exciting title, but for me, that is where the excitement began and ended. It is often categorized as gothic or horror. I assume these genre characterizations are inferred from the title, but no! It is neither! It is a satire of British romanticism.

Christopher Glowry – the first of many aptronyms in this novella – is a dour widower and lord of Nightmare Abbey, early 19th Century England. He lives with his son Scythrop, a pessimistic philosopher who, when not agonizing over his impotence to change the world, is confused and confounded by love for two different women.

Everyone in this story is ridiculous, which is certainly fair play for satire. The abbey hosts a parade of visitors participating in long, pointless debates. Most are of morose personality, presumably chosen to complement their host:  Mr. Listless, Mr. Toobad, Mr. Larynx, et al. Only Mr. Hilary, Glowry’s brother-in-law, presents a cheerful contrast.

As I write this, I realize the first aptronym is actually the abbey's name. It would have been a nightmare to spend an hour amongst its denizens.

I suppose Nightmare Abbey was successful as satire, but it hasn't aged very well. I found a few moments amusing, but most were lost on me. Many of the cast are caricatures of contemporary persons, some of them authors, presumably those Peakcock is satirizing. This character mapping had little meaning for me.

It’s a short, easy read. I’m glad to be moving on to the next book.

This novel satisfies the category of a title containing a "Compound Word" in the What’s in a Name? 2022 challenge and “A Classic Set in a Place You’d Like to Visit” [England] category in the Back to the Classics 2022 Challenge