Observations from my weekly wanderings, usually in Northern Virginia (NOVA), but since nova means “new” you could also take it to mean new this week.

And the pic is just a really sweet 64 Chevy NOVA II SS. 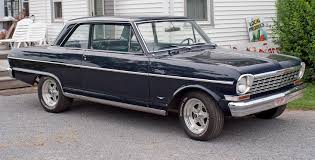 For starters, Happy 35th Anniversary today, to my Beautiful Bride. Let’s do another 35 years.

**********
Random Quotation of the Week: In this world goodness is destined to be defeated. But a man must go down fighting. That is the victory. To do anything less is to be less than a man. ~ Binx’ Aunt Emily, from The Moviegoer by Walker Percy

**********
Scripture from this week’s reading of The One Year Chronological Bible (NIV): Blessed are those whose ways are blameless, who walk according to the law of the LORD. Psalm 119: 1

**********
Excerpt from my current read:  The agent told him that he would see doves and plumed quail, but during all the time he lived there, he saw only a few large, black velvet spiders and a lizard. He grew very fond of the lizard. ~ Narrative regarding Homer Simpson (yes…Homer Simpson.)

**********
Shocking news of the week: There is a character in The Day of the Locust, published 1939, named Homer Simpson. (yes…Homer Simpson.) He’s a bit socially awkward, and I keep imagining him exclaiming…”D’oh!!!”

**********
Vanity Plate of the week:  Yesterday morning it was a tossup between MCBLUE (Virginia plate that also had the University of Michigan logo on it), and OH2 READ. But I happened to see OH2 READ both on the way to work, and on the way home, so it’s the winner. I don't think I need to explain.

**********
Other thoughts: I don’t know, might become my weekly rant, except a notable personality has already claimed to be the sole ranter of rants, so this may become my weekly philippic. I’m not sure yet. I’m not a negative person, but we all have things we don’t like right? And it can be therapeutic to vent now and then right? So again, I don’t know, but this may become my forum for a weekly philippic.  Anyway: I thought I’d express my dislike for – hmmm – what to call it, the propensity to shorten words to near gibberish, ie: selfie, grats (congratulations), you so cra (you are so crazy), guac (guacamole), dis (disrespect), vom (vomit), etc.

That’s all. But I was wondering, if fellow bookish bloggers, whom I assume are sort of logophiles, or word nerds, feel the same? Bit like Orwellian newspeak isn’t it? Yeah, it’s quick, easy, efficient – ugly.

I read a phrase last week from Toni Morrison’s Beloved that was so beautiful, I read it about six times just to indulge myself.  Denver, a young African American girl, who had known little kindness in her life, had a young gentleman say to her: Take care of yourself Denver.

And Morrison described Denver’s reaction: she heard it as though it were what language was made for.

It IS – what language was made for!

**********
But otherwise, the stroll along Mulberry Street was rather pleasant this week.