This is a bit overdue, but the honor came unexpectedly, so I had to buy a tux and practice my acceptance speech…all that.

I’d like to thank Zezee of Zezee With Books for nominating me for the Premio Dardos Award. I appreciate the honor.

However, I have just a bit of trepidation to follow “the rules” and pass it on. There is one aspect of social media that, hmmm, bugs me a bit. I have an aversion of doing anything that obligates anyone else to anything and an aversion to anyone obligating me.

Let me be clear. I don’t believe that’s what this is, but I feel that some might, almost, just maybe, feel that way, and hence my trepidation. But as I said, it’s just a “bit” of trepidation. I'm going to rise above it, as I do appreciate the honor.  So I’m going to pass it on.

Just know, that I am nominating you because I enjoy your blog and your insights on the common love of classic literature. If you don’t feel like passing it on, no worries and no explanation necessary. I can’t promise, however, that some sort of Premio Dardos SWAT team won’t knock down your door in the middle of the night and drag you off to a correctional facility in an undisclosed South American village, but again – no worries as far as I’m concerned.

My nominations follow the rules...cuz we gotta have rules, or it's just rugby. 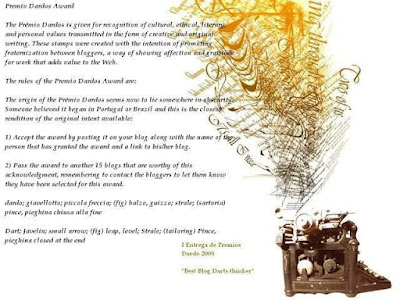 Without further ado, my nominations are:

Music and My Mind

The Edge of the Precipice

The Oddness of Moving Things