Observations from my weekly wanderings, usually in Northern Virginia (NOVA), but since nova means “new” you could also take it to mean new this week.

And the pic is just a really sweet Chevy NOVA. I’m uncertain of the year, guessing 69. 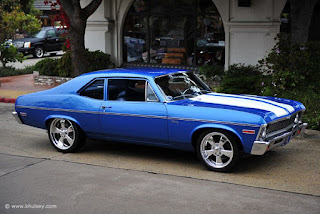 **********
Random Quotation of the Week: I've visited thirty-one inhabited planets in the universe. Only on Earth is there any talk of free will. ~ Unnamed Tralfamadorian, Slaughterhouse Five

**********
Scripture from this week’s reading of The One Year Chronological Bible (NIV): But you, Bethlehem Ephrathah, though you are small among the clans of Judah, out of you will come for me one who will be ruler over Israel, whose origins are from old, from ancient times. Micah 5:2

**********
Excerpt from my current read:  Dixon’s efforts on behalf of his special subject, apart from thinking how much he hated it, had been confined to aiming to secure for it the three prettiest girls in the class… ~ Narrative from Lucky Jim

**********
Vanity Plate of the week:  2 NFINITY  To most I suppose it is obvious, but for the sake of those without children or taste for children’s movies, The character Buzz Lightyear from Toy Story has as his catchphrase – To infinity and beyond!

**********
Other thoughts: I’m pretty bummed that Canada beat the USA in both Men’s and Women’s basketball in the Pan American games. However, I still have hope. Kanye West is doing the closing ceremonies tomorrow, and I suspect he will take the Gold from Canada and award it to Beyonce.