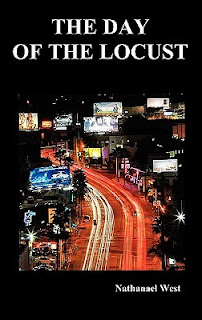 Yes, despite his appearance, he was really a very complicated young man with a whole set of personalities, one inside the other like a nest of Chinese boxes. ~ Narrative describing Tod Hackett

This is the first time I’ve read The Day of the Locust or Nathanael West. The novel is a third-person narrative. Published in 1939 it predates the standard timeline of postmodernism, but I would still say it is decidedly postmodern. It is set in Hollywood, 1930s, during the Great Depression. Most of the characters are associated with the film industry, and though none are rich and famous, most fare a bit better than the average American, and are a bit aloof to the plight of the masses.

Tod Hackett is the main character. He works at a movie studio on set and costume design, but he is truly an artist, looking for inspiration. The studio gig is just a job to pay the bills, but it also exposes Tod to a number of amusing characters, mostly Hollywood caricatures. One such character/caricature is Faye Greener, a beautiful, aspiring actress, superficial and vain, and platinum blonde (caricature – remember). Tod is hopelessly in love with Faye, but she never leaves any doubt the feeling is not mutual. She is happy to be a coquettish friend, but she is only interested in men who are wealthy and good looking. Tod describes Faye:

Nothing could hurt her. She was like a cork. No matter how rough the sea got, she would go dancing over the waves that sank iron ships and tore away piers of reinforced concrete. He pictured her riding a tremendous sea. Wave after wave reared its ton on ton of solid water and crashed down only to have her spin gaily away.

Tod is sort of a sap, and yet he is one of the less pathetic characters in the novel. I’ll only mention one other, Homer Simpson – yep that’s right, Homer Simpson. I won’t go into his foibles, but rather offer some narrative about Homer that amused me, regarding his new residence:

The agent told him that he would see doves and plumed quail, but during all the time he lived there, he saw only a few large, black velvet spiders and a lizard. He grew very fond of the lizard.

You know already, by the three stars, that I didn’t love The Day of the Locust. It was amusing at times, maddening at others, but mostly I didn’t see the point, which might be the point – pointlessness. Throughout the novel, Tod works on, or more commonly thinks about working on his painting, a work in progress and perhaps his magnum opus, entitled The Burning of Los Angeles. His vision for the painting morphs throughout, and comes to perfect clarity when he is caught up, and nearly killed, in mob violence at a movie premiere.

Tod’s pursuit of Faye, may be West’s portrayal of the pursuit of the “American Dream.” Faye is elusive and illusive, unattainable and not worthy of attainment. There are a few other little disillusions that Tod expresses, that makes me think this may be the author’s intent.

The final scene, mob violence at a Hollywood premiere, seems to be what the painting has been foreshadowing all along. Perhaps Tod is a genius, perhaps not. The novel ends rather abruptly leaving the question in doubt.

Only those who still have hope can benefit from tears. But to those without hope, like Homer, whose anguish is basic and permanent, no good comes from crying.
Tod’s thoughts about the mob before it turned violent: It was a mistake to think them harmless curiosity seekers. They were savage and bitter, especially the middle-aged and the old, and had been made so by boredom and disappointment.