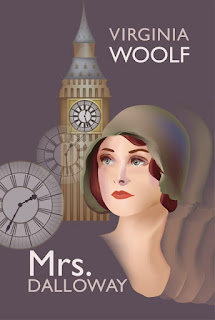 As a cloud crosses the sun, silence falls on London; and falls on the mind. Effort ceases. Time flaps on the mast. There we stop; there we stand.

This is the first time I’ve read Mrs. Dalloway and the second novel I’ve read by Virginia Woolf. The story is written predominantly in stream of consciousness. I think it would be called a modernist work, along with Woolf’s other novels.

I've made no secret of my dislike for stream of consciousness, but I seem to dislike each occurrence a little less. I strongly disliked Ulysses, disliked The Sound and the Fury and To the Lighthouse, but liked A Portrait of the Artist as a Young Man, As I Lay Dying, and Absolam, Absolam! a bit more, and now I liked Mrs. Dalloway more than my previous experience with Woolf.

Obviously, I still didn’t love it, but I am getting used to stream of consciousness. A good thing, as my next novel by Faulkner, likely uses it.

The story covers a single day in the life of Mrs. Dalloway as she plans an elaborate party that evening. A single day, but there are many flashbacks in the consciousness of characters. It takes place in London, shortly after the First World War. There are two main characters, Mrs. Clarissa Dalloway and Septimus Smith. They do not know each other, but their lives become oddly intertwined.

Mrs. Dalloway is 50 something, a socialite, the wife of a minor government official. She loves London and high-society. She is a little vain, materialistic, or even superficial, but she is not completely unlikable. Septimus Smith is a pitiable veteran of the war, who is losing his mind, probably due to post-traumatic stress.

There is a stark contrast between the two. Mrs. Dalloway has known little but comfort and privilege, whereas Septimus, once with a promising career, is ruined by the war and no one except his foreign wife seems to notice or care.

There are numerous secondary characters: Rezia Smith, Septimus’ Italian born and worrisome wife; Peter Walsh, a one-time suitor of Mrs. Dalloway; and Sally Seton, a childhood friend of both Mrs. Dalloway and Peter.

These and other characters attend Mrs. Dalloway’s party and the narrative shares bits of their consciousness.

At the party, Mrs. Dalloway learns through a guest, a doctor, of one of his patients, Septimus, who has committed suicide. Even though she did not know Septimus, his death affects Mrs. Dalloway in a unique and powerful way. At first, she is almost insulted that the topic of his death should invade her party, but as she contemplates it, she identifies with Septimus, and seems to take some sort of satisfaction from his suicide.

She felt somehow very like him – the young man who had killed himself. She felt glad that he had done it; thrown it away.

Ah well…very existential. Woolf’s prose has some moments of beauty, but overall – I’m not a fan.

One element that was similar to my previous exposure to Woolf is the duplicitous nature of all the characters contrasted between their spoken words and private thoughts. Mrs. Dalloway has an ironic thought:

Cleverness was silly. One must say simply what one felt.

Ironic because Mrs. Dalloway, like all the other characters almost NEVER says what she feels.

Woolf uses the chiming of Big Ben as a motif throughout the novel. As various characters are about their business, they hear Big Ben, each occurrence a bit later in the day – symbolizing I suppose the unstoppable progress of time.

In people’s eyes, in the swing, tramp, and trudge; in the bellow and the uproar; the carriages, motor cars, omnibuses, vans, sandwich men shuffling and swinging; brass bands; barrel organs; in the triumph and the jingle and the strange high singing of some aeroplane overhead was what she loved; life; London; this moment of June.
The world has raised its whip; where will it descend?

Peter Walsh convincing himself he was not still in love with Mrs. Dalloway…

unable to get away from the thought of her; she kept coming back and back like a sleeper jolting against him in a railway carriage; which was not being in love of course; it was thinking of her criticizing her, starting again, after thirty years, trying to explain her.

Septimus was one of the first to volunteer. He went to France to save an England which consisted almost entirely of Shakespeare’s plays and Miss Isabel Pole in a green dress walking in a square.
This was now revealed to Septimus; the message hidden in the beauty of words. The secret signal which one generation passes, under disguise to the next is loathing, hatred, despair.
So there was no excuse; nothing whatever the matter, except the sin for which human nature had condemned him to death; that he did not feel.
They thought, or Peter at any rate thought, that she enjoyed imposing herself; liked to have famous people about her; great names; was simply a snob in short. Well, Peter might think so. Richard merely thought it foolish of her to like excitement when she knew it was bad for her heart. It was childish, he thought. And both were quite wrong. What she liked was simply life.

Rezia Smith describing words that Septimus had her record in a journal:

She wrote it down just as he spoke it. Some things were very beautiful; others sheer nonsense.

…there was the terror; the overwhelming incapacity, one’s parents giving it into one’s hands, this life, to be lived to the end, to be walked with serenity; there was in the depths of heart an awful fear.

Film Rendition:  1997 starring Vanessa Redgrave as Mrs. Dalloway and Natascha McElhone as young Clarissa Dalloway. A very worthy portrayal - and just about as exciting as the book. I thought Redgrave and McElhone were superb choices as was all the casting. To convert stream of consciousness writing to film requires taking some liberty with the written work, but this was still quite true to the book.