NOVA this week was prompted by last week's prompt. When describing some of the statues in Washington D.C. I remembered the first statue that I recall ever seeing in person.

I grew up in Kalamazoo Michigan. Kalamazoo is a funny name; it is from a native word from the Potawatomi tribe but the precise meaning is lost. It used to be, 60s, maybe 70s 80s, that if you traveled to other parts of the country and announced you were from Kalamazoo, people would often say with some surprise "there really IS a Kalamazoo?" They'd heard the name in a #1 hit song by Glen Miller and His Orchestra, "I've got a Gal in Kalamazoo" but most apparently didn't believe it was a real place.

It is. In fact, we used to have T-shirts that read "Yes, there really is a Kalamazoo". But, the world is shrinking. People are seldom surprised by the name, so we don't wear those T-shirts anymore.

Hoyt Axton had a fun song, Della and the Dealer that mentions a Cat named Kalamazoo. It's worth a listen.

The cat was cool and he never said a mumblin word.

A few other facts about Kalamazoo - it's oozamalak backwards - what're the odds? It's half-way between Chicago and Detroit, all three connected by I-94. Kalamazoo is the home of the original Gibson Guitar factory and the one-time fourth largest car company in the U.S. the Checker Cab company. All those Checker Cabs you see in old movies came from Kalamazoo.

The city was nicknamed Mall City as it had the nation's first pedestrian shopping mall, but that nickname has gone the way of the T-shirts. Kalamazoo's most famous son is future Hall-of-Famer, Derek Jeter of the New York Yankees. I'm a bit bitter about that. He should have been a Detroit Tiger.

Kalamazoo was originally called Bronson after the founder Titus Bronson. Titus was not particularly well liked and was eventually run out of town. The name was changed to Kalamazoo in 1836. Bronson's legacy is not entirely lost though as a park in the heart of the downtown district is still known as Bronson Park.

I now live near the city of great white monuments, but the first monument ever I remember was from my childhood home of Kalamazoo, Michigan. 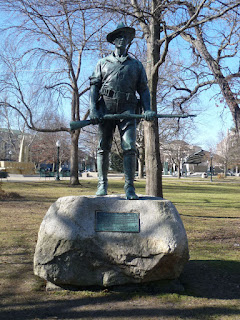 In the North-east corner of Bronson Park stands The Hiker, about nine feet tall on a four foot base. He was a giant; in my simple childish mind these were his actual proportions. He was a hero to me. No one could tell me anything about him, but I knew he was a defender of something precious of which I was the beneficiary. I saw him often because my father owned and operated a barber shop just across the street from his post. Every time my brothers and I went downtown for our haircuts, I'd visit him. I was a little sad that no one knew his name. I thought he deserved better. He looked invincible and aloof, vigilantly watching for threats, but I also thought he was kind, though not exactly friendly. I thought he probably didn't have time for a family and might not know how to play with a child. No matter. He was there to defend.

I go "home" every now and then and like to visit the old warrior. He's suffered the years and elements extremely well. In 1980 an F3 tornado went through Bronson Park, uprooting most of the 30, 40, 50 year old trees, drastically changing the appearance of the park. But not the Hiker. He keeps his silent vigil just the same.

Well, the world is smaller and information has exploded. I was able to learn a little about The Hiker.

According to Wikipedia, The Hiker is a statue created by Theo Alice Ruggles Kitson to commemorate American soldiers of the Spanish-American War, the Boxer Rebellion, and the Philippine-American War. The first version was made for the University of Minnesota in 1906 and at least 50 copies were made and erected across the United States. The statue in Bronson Park was erected in 1924.

I have mixed emotions about this information. I’m glad to finally learn his provenance, but I was mostly sad. Sad that he was not Kalamazoo’s special hero, not some Boone-like, Crocket-like legend. Sad that he was a composite, not a specific named pioneer. Sad that we shared him with other cities. Sad of course that ours was not the original.

But I suppose my sadness…

Well, it is of no consequence. There were specific, named adventurers who were lost to the Spanish-American War, the Boxer Rebellion, the Philippine-American war. There was sadness enough in specific, named, families who lost a husband, father, son, brother.

He is a hero still without a name. I am the beneficiary still of something precious.