Sam and the Firefly by P.D. Eastman - Guest book review by my Grandson Judah 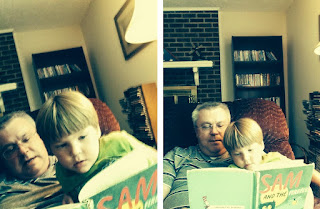 My eldest Grandson, Judah, finally sat still long enough to read a book with me and I was able to persuade him to submit a guest review.

Judah has less affinity for the classics, such as Dr. Seuss or Berenstain Bears, but finds greater satisfaction in more arcane works. Judah believes stories of whimsical lands and fanciful creatures are fine for children, like his brother Luke or cousin Andrew, but he prefers something a bit more cerebral.

One of Judah’s favorite authors is P.D. Eastman. Judah points out that like Hawthorne and Poe; Eastman and Seuss were good friends and clearly influenced one another’s writing. Judah believes Eastman’s influence is most evident in some of Seuss’s more profound works such as The Great Butter Battle and The Sneetches.

According to Judah, Eastman’s seminal work – Sam and the Firefly is clearly his magnum opus. The story is a third person, post-modern narrative of an Owl named Sam and a firefly named Gus.

Sam is a wise and fun loving owl. Owls being nocturnal, Sam comes out at night and wonders: Who? Who? Who wants to play?

Judah also believes this technique serves as a bridge to allow the reader to accept a talking and sentient owl, by using language quite plausible to the species.

Sam looks for a companion to share nighttime fun, but is initially confounded as all his potential playmates are peacefully sleeping. But then of course, as the title suggests, Sam meets a firefly – Gus to be precise.

Initially, Sam and Gus indeed have some innocent fun writing words in the night sky, but Gus’ play takes a mischievous twist that grows increasingly diabolical, writing words that cause confusion, mayhem, and catastrophe. Sam is horrified and tries to dissuade Gus from this villainous and disastrous path, but to no avail.

Judah will spare the spoiler and say only that Gus’ irresponsible actions lead to his own demise, but just when things seem darkest, pardon the pun, Gus is given a new chance to shine and redeem himself.

Judah believes Gus and the Firefly is a fairly simple commentary: we must all face the consequences of our actions. But Judah stresses not to miss the extreme importance of this message for its simplicity. He confesses it is a lesson he forgets from time to time, but one his Mommy, Daddy, and Gramms are quick to confirm.

Judah felt there were secondary, but similarly poignant themes of friendship, repentance, and atonement.