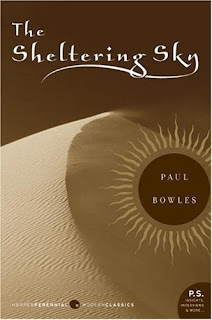 "…the sky here’s very strange. I often have the sensation when I look at it that it’s a solid thing up there, protecting us from what’s behind." ~ Port Moresby from The Sheltering Sky

This is the second time I’ve read The Sheltering Sky and the only work I’ve read by Paul Bowles. It is an existential novel, set in post-colonial, Northern Africa sometime after WWII. It is the third-person narrative of Americans Port and Kit (Catherine) Moresby, their friend Tunner, and their journeys throughout North Africa.

This novel satisfies category two: A 20th Century Classic, from the Back to the Classics Challenge 2016.

I’ve read Bowles described as a keen observer of other civilizations, and of writing about the gap in understanding between cultures. Those descriptions are well validated by this, his best-known novel. I first read this about 10 years ago. I didn’t like it much at the time. I believe that was probably due to my impatience with existential angst. Kit and Port especially are the embodiment of existential angst…blech. Their friend Tunner is easy going, but he’s a cad…more blech.

Port inherited a small fortune from his father, and leads a life of leisure, mostly traveling the world.

He did not think of himself as a tourist; he was a traveler.

Kit wanted to go to Italy, but capitulated to Port’s idea of Africa.

It was as if always he held the fresh hope that she, too, would be touched in the same way as he by solitude and the proximity to infinite things.

Port should have listened to Kit – but then, this would probably just be a travelogue and not a classic novel.

Tunner – well both seem to regret Tunner’s presence, and imply they were tricked or trapped into inviting him.

From the beginning, you get the impression Port is rather arrogant and cavalier about Africa: the ugly American. He is fairly well prepared in a technical sense, but a bit aloof about – those gaps in understanding of other civilizations.

You also get the impression that Port and Kit’s marriage is not one of perfect bliss, though they seem committed to saving it. Indeed, the trip to Africa was likely an attempt to foster some intimacy. Finally, the reader gets the impression that Tunner may not be the best influence.

All of these impressions prove true. Africa, or perhaps more precisely the Sahara, has its way with the travelers. Its way is harsh and unrelenting.

You can probably tell I didn’t like any of the characters in this novel, but I liked the novel. Bowles does a magnificent job filling the gaps. I’ve done a bit of globetrotting myself, but I’ve never been to Africa. This novel doesn’t exactly make me want to go, but it paints a compelling picture.

He did not think of himself as a tourist; he was a traveler. The difference is partly one of time, he would explain. Whereas the tourist generally hurries back home at the end of a few weeks or month, the traveler, belonging no more to one place than to the next, moves slowly, over periods of years, from one part of the earth to another. ~ Port Moresby

He opened his eyes, shut his eyes, saw only the thin sky stretched across to protect him. ~ Port Moresby

Someone once had said to her that the sky hides the night behind it, shelters the person beneath from the horror that lies above. ~ Kit Moresby (but I can guess who “someone” might have been)

Film Rendition: 1990 starring John Malkovich and Debra Winger is a pretty faithful rendition, with some stunning imagery of the Sahara. My only complaint, I didn't picture Port as John Malkovich at all, though he played the part well.